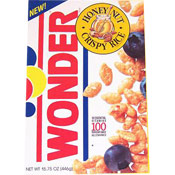 The cereals were produced by Ralston-Purina through a licensing agreement with it's then-subsidiary Continental Baking, producers of Wonder Bread.

The introduction of Wonder cereals was heralded by Ralston as "the greatest thing since sliced bread."

"Introducing Wonder brand cereal... a wonderful new breakfast cereal for the whole family... for growing up... for the wonder years..." 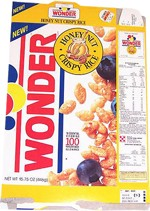 Submitter: moonstarlight
Uploaded: 1/29/2009
Additional details
Upload an image for this cereal
Comments About This Cereal
What do you think of Wonder?
By Tony14

It was alright, but it wasn't the "greatest thing since sliced bread" as they claimed. That was a lie.

Do you think they named these cereals after the bread?

I really wanna try this cereal.