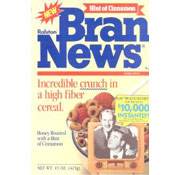 
According to the box, this cereal had a "hint of cinnamon" and an "incredible crunch in a high fiber cereal".

The cereal pieces looked like darker Cheerios. They were "honey roasted with a hint of cinnamon."

Submitter: jeffrey
Uploaded: 1/9/2011
Additional details
Upload an image for this cereal
Comments About This Cereal
What do you think of Bran News?

I discovered this cereal at my local YMCA gym, where someone had set up a display with those small single-serving boxes as take home samples. I grabbed a few on the way out, had one for breakfast the the next morning and was blown away with how tasty it was. I returned to the YMCA the next day to load up on more samples. I actually looked forward to having it for dinner a couple times. Honestly, the best cereal I've ever had. I never found it in a grocery store and am sad to this day it isn't available.

This is the cereal Abbot and Costello used to advertise. Abbot I got a new cereal. Costello what's it called? Abbott bran news. Costello brand new what? Bran news.

I still think about this cereal. I miss it... It was a favorite.

I remember it. It was actually pretty tasty.