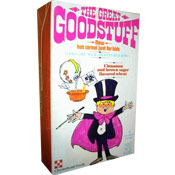 From: Ralston
Introduced in 1969


The Great Good Stuff was described in a 1969 newspaper advertisement like this:

Loaded with vitamins, minerals and protein.

Sweetened with brown sugar and cinnamon - tastes so good it disappears like magic.

It's assumed - though not verified - that the kid-magician who appeared on the box was also named The Great Goodstuff.

Note From Mr Breakfast:
As a practice, we only include a hot cereal in the database if there's something super cool about it, ie. historic, kitchy, etc. This one is included because it's so rarely seen and we liked how adding water to oats is described as "cooks like magic". 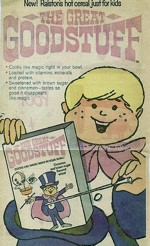 Submitter: Mr Breakfast
Uploaded: 10/3/2008
Additional details
Upload an image for this cereal
Comments About This Cereal
What do you think of Great Goodstuff?
There are no comments yet for this cereal. Be the first! Was it good? Was it bad?
Do you have information not included in the article? Let the world know!