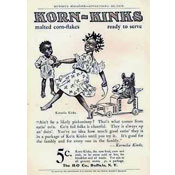 From: Independent / Undefined
Introduced in 1890


Korn Kinks was a malted corn flake cereal produced by the H-O Cereal Company of Buffalo, New York from around 1890 to 1910.

Korn Kinks has the distinction of being the most politically-incorrect cereal in our database. Ads for Korn Kinks featured the adventures of a young black girl named Kornelia Kinks and her family. The characters were illustrated as pre-war black stereotypes with bare feet, enlarged lips and bulging eyes.

Souvenir postcards from 1907 called "Jocular Jinks of Kornelia Kinks" have become a hot commodity among collectors of Black Americana. The postcards are a terrific study in early 1900's racism. The quotes on the cards say little about the cereal:
A 1907 ad for both the cereal and the postcards gave more of a glimpse into the cereal:

"If every member of every family only knew how this palatable flaky corn food 'braces' up the system - satisfies that weak 'gone feeling' and lays the foundation for the day, they would be eager to try it. It soothes - it satisfies - doesn't overheat the blood and digests easily - may be taken hot or cold - anywhere - any time. Even try it in your Grocer's store - merely a nickle." 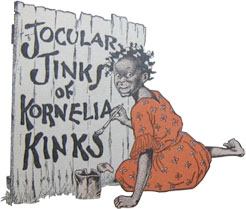 Kornelia Kinks was the mascot for Korn-Kinks cereal around 1907.

In her book Raising Customers (2004), Lisa Jacobson described Kornelia as "a pickaninny with bulging eyes and exaggerated white lips... Repeated foiled in her attempts to abscond with a box of Korn Kinks cereal, Kornelia, unlike the precocious white children on other advertisements, never manages to get her way."

Submitter: Mr Breakfast
Uploaded: 9/30/2008
Additional details
Upload an image for this cereal
Comments About This Cereal
What do you think of Korn-Kinks?
By PublicEnemy009

I have a boxed word game titled Kornelia Kinks At Jamestown: Her funny adventures at the exposition. Made by Milton Bradley Co. Springfield, Mass. I cannot find records of this word game in the MB historical record though. Does anyone have more info for me. The game directions state Copyright 1907.