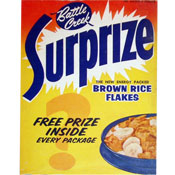 Suprize was the last cereal introduced by Eugene McKay. Earlier in his career, McKay had been responsible for one of Kellogg's most-loved cereals, Rice Krispies. As the chief manufacturing executive for Kellogg's, he was also instrumental in the development of All Bran, Krumbles and Pep cereals.

After the war, McKay and his brother George purchased the Battle Creek Food Company, a health-food business originally established by Dr. Kellogg.

The side panel went on to say, "Newest cereal of the world's oldest producer of fine cereal and special purpose foods."

The ingredients for the cereal were listed as simply brown rice, sugar and salt.

Submitter: Mr Breakfast
Uploaded: 9/25/2008
Additional details
Upload an image for this cereal
Comments About This Cereal
What do you think of Suprize?
By Daughter

I am the daughter Eugene McKay. My Name is Ella Joy McKay Bell. I remember a lot of these times.