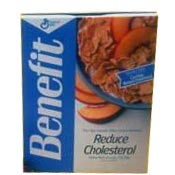 
The front of boxes Benefit described the product as "the high soluble fiber cereal shown to reduce cholesterol". The bold claim was due to the fact the cereal contained psyllium. The New York Times referred to the cereal as "high in fiber, but low in taste".

Psyllium (pronounced 'silly-um') is a grain grown in primarily India. Its husk is high in soluble fiber, which has been shown to reduce cholesterol levels. Psyllium contains about 80 percent soluble fiber, compared to 10% found in oat bran. 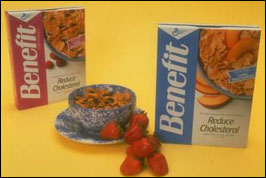 Prior to to this cereal and Kellogg's Heatwise, a psyllium-enriched cereal introduced around the same time), psyllium was best known for its inclusion in laxatives like Metamucil.

In 1989, the F.D.A. challenged General Mills to substantiate the claims made on Benefit boxes.

The F.D.A. proposed numbers questions to the cereal manufacturer, including, "What is the laxative effect of psyllium? The more fiber consumed, the greater the rate at which food passes through the gastrointestinal tract."

The public association of the breakfast cereal with words like "laxative" and "stool" disproved the old saying "any publicity is good publicity". General Mills removed Benefit from shelves in December of 1989, shortly after they were forced to defend it.

The company was left with 50 tons of unsold cereal which they sent off to feed livestock in South Dakota. Thus, Benefit is known within our database as "the cereal that helped thousands of cows and pigs stay regular".

Upload an image for this cereal
Comments About This Cereal
What do you think of Benefit?

I remember eating this cereal as a little kid in the 1980s.