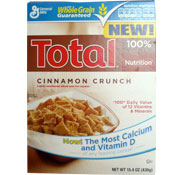 From: General Mills
Introduced in 2008


The box describes this cereal as "lightly sweetened wheat and rice squares". It's also proclaims that the cereal has "Now! The most Calcium and Vitamin D of any leading cereal!"

The cereal pieces are unique among Total cereals in that there are no Total flakes. The square cereal pieces resemble those of another General Mills cereal called Cinnamon Toast Crunch. The flavors of the two cereals are also very similar with the Total cereal having more of an adult whole-grain quality.

The back of the first box for Total Cinnamon Crunch reinforces the selling points on the front with the large heading "The Most Calcium and Vitamin D of any leading cereal!". Accented with images of active, healthy people the box gives a lengthy description of the cereal's health benefits.

The subheadings on the back of the box are:

- Antioxidants For Your Health

- Give Your Morning a Fiber Boost

Total Cinnamon Crunch Cereal has been reviewed on MrBreakfast.com. 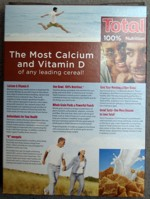 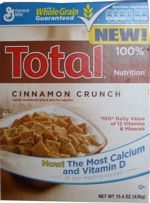 Submitter: Mr Breakfast
Uploaded: 7/14/2008
Additional details
Upload an image for this cereal
Comments About This Cereal
What do you think of Total Cinnamon Crunch?

I am pregnant and this cereal is awesome for me to get all the vitamins I need without choking on a hoarse pill. I even travel with it!