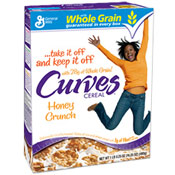 It's the "bee's knees" with crunchy toasted flakes, sweet honey and packed with fiber. A yummy way to get over 1/2 of your whole grains each day!

A one-cup serving of the cereal had 190 calories, 1 gram of fat, 5 grams of dietary fiber, 9 grams of sugar and 4 grams of protein.

The cereal has been said to taste similar to Special K, Total or Wheaties with lighter, crunchier flakes and a touch more sweetness.

Both Honey Crunch Curves and its sister cereal Whole Grain Crunch Curves were promoted with the tag line "... take it off and keep it off." 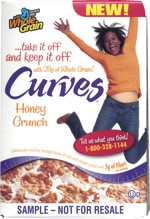 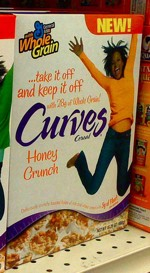 Submitter: Heather_S
Uploaded: 6/25/2008
Additional details
Upload an image for this cereal
Comments About This Cereal
What do you think of Curves Honey Crunch?
There are no comments yet for this cereal. Be the first! Was it good? Was it bad?
Do you have information not included in the article? Let the world know!