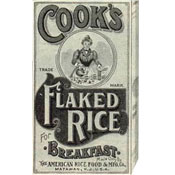 From: Independent / Undefined
Introduced in 1901

Submitter: Anita
Uploaded: 3/22/2008
Additional details
Upload an image for this cereal
Comments About This Cereal
What do you think of Cook's Flaked Rice?

George F. Cook patented a process to make his flaked rice. The woman on the package and advisement was his wife Amy. They also came up with the idea of advisement dolls. The Company was sold in 04-05. They moved to Miami and became one of early Miami's Business Pioneer.