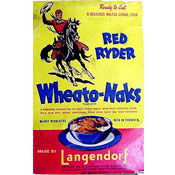 
Made by Langendorf. Promoted on the box as being "Ready To Eat", "A Delicious Malted Cereal Food". "Mildly Regulative" and "Rich In Vitamin B1".

Upload an image for this cereal
Comments About This Cereal
What do you think of Wheato-Naks (Red Ryder)?

Most of us know Red Ryder from the reference to the Daisy rifle in the holiday movie classic, "A Christmas Story" ("You'll shoot your eye out!") Red Ryder was a western hero whose sidekick was an Indian boy named Little Beaver (played on radio by Frank Bresee and in movie serials by Robert "Bobby" Blake). Red Ryder's radio sponsor was Langendorf bread which was the company that made this cereal. I believe they only served the areas around Los Angeles, San Diego, and San Francisco. That's why this cereal didn't get that much coverage. The Langendorf company has long been out of business.