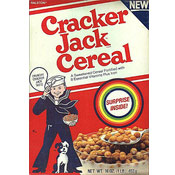 
A magazine ad introducing this cereal in 1983 read, "Introducing Cracker Jack brand Cereal. Nutritious golden puffs of cracklin' crunch and a prize in every box."

Cereal boxes had the catchphrase "Taste so good, it'll make anyone crack a smile." 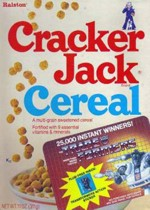 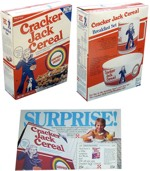 Submitter: Mr Breakfast
Uploaded: 9/23/2008
Additional details
Upload an image for this cereal
Comments About This Cereal
What do you think of Cracker Jack Cereal?

As a kid, for awhile, this was my number one reason for getting up in the morning.

It was the best!

They should truly bring back Cracker Jack Cereal! Let America taste this excellent cereal. It's the best cereal I ever tasted in my life!

They really should bring this cereal back.

This was the best cereal ever on the planet!

I loved this cereal! The closest I've found is Reeses Puffs but it's just not the same! Bring us back our Cracker Jack!

I loved this cereal when I was little... the cereal and the the actual candy. Especially the prizes!

I loved this cereal so much that I actually cried when the company stop making them. Please bring them back.