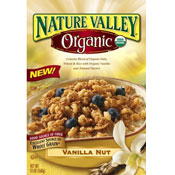 
This now-discontinued cereal was described on the box as a "crunchy blend of organic oats, wheat & rice with organic vanilla and almond flavors." According to the box, it was a "good source of fiber" and an "excellent source of whole grain."

We know this cereal was in production in 2008, but it may have been introduced earlier.

This cereal was different from two other Nature Valley cereals that were introduced in 2007. Those products included pieces of Nature Valley's famous granola bars as part of the cereal. See Nature Valley Oats 'N Honey Cereal and Nature Valley Cinnamon Cereal. 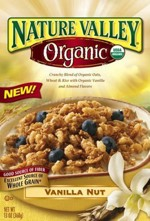 Submitter: Mr Breakfast
Uploaded: 3/19/2008
Additional details
Upload an image for this cereal
Comments About This Cereal
What do you think of Nature Valley Organic Vanilla Nut?

I loved this cereal, and I really miss it. I am sad that it was discontinued.

Costco used to carry this brand - what happened, I have looked at all Costco's in our area and none of the stores have it anymore. Bring it back or let me order direct - in bulk even for a discount? Love it and especially that it is organic!