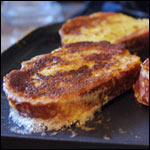 (4 servings)    Printable Version
Beat all ingredients, except bread, together.

Dip bread into the egg and milk mixture coating both sides completely. Place each slice of breakfast in the hot frying pan.

Pour leftover milk mixture on top of the bread.

Fry on both sides until golden brown.

Serve with your favorite topping.

Cooking Note: This is a great recipe to use for any bread that's starting to get stale. The more dry the bread... the more egg and milk mixture it absorbs, which makes for the best French toast.

This is our family's go-to French toast recipe. The kids like it with peanut butter on top. For a treat, try the same recipe but use cinnamon raisin bread (and omit the cinnamon). It's so good.

Mr Breakfast would like to thank Saunny for this recipe.


Comments About This Recipe
What do you think of Amish-Style French Toast?
Overall Average Rating = 4 (out of 5)
Based on 5 votes.

From enasm09 (Team Breakfast Member)
Just made it with homemade bread so it was a little soft but still delicious. Topped it with heated chopped apples and maple syrup.

From ainee
I just make it this morning. Its delicious! Thank you for the recipe!

From break4fast (Team Breakfast Member)
I never use that much milk but it certainly makes for yummy french toast. Way better than the plain french toast I grew up with.

The best french toast is made with slightly dry home made bread. Store bought is too gluey. If you must use it, set it out to dry on a rack overnight covered with a clean tea towel.

From Nancy H.
I found it to be a little too soggy. Maybe add another egg or less milk. Anyone else have this problem?