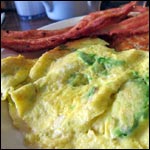 (4 servings)    Printable Version
Saute peppers and onions in a small amount of oil. Add cilantro and parsley, season with salt and pepper. Cook until tender. Reserve. Combine eggs and milk. Mix well and reserve.
Heat a non-stick omelette or egg pan over medium heat. Portion beaten egg into pan. Stir in sauteed pepper and onion. Cook until set. Flip omelette and cook until done. Add sliced avocado and top with cheese. Fold omelette and turn out onto warm serving plates.

Spanish Manchego cheese is available in the specialty cheese section of most large grocery or food specialty stores.

Mr Breakfast would like to thank efarkas for this recipe.


Comments About This Recipe
What do you think of Avocado, Manchego Cheese Omelette?
Overall Average Rating = 4 (out of 5)
Based on 5 votes.

From S.F.O.
I replaced the Manchego cheese with just 1/3 cup grated Parmesan cheese. It was still delicious without all that extra cheese.

From Raw311
I don't eat egg dishes but I cooked this for a friend and she said it was amazing. I went w/ extra cilantro and added some cayenne pepper.

From Great
Just don't use cilantro!!

From roller
I thought it was a great pick-up for the morning. I have to admit though that the avocado and bell pepper was already a favorite of mine.