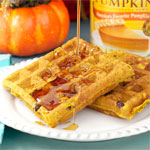 (4 servings)    Printable Version
These waffles were pretty much perfect. They had the pumpkin flavor I was hoping for. The cranberries were nicely softened and added a sweet tanginess to each bite. The texture of the waffles was close to ideal... lightly crisp on the outside and decidedly fluffy on the inside. I found that I didn’t need to grease my waffle iron if I added just 1 more Tablespoon of oil or melted butter to the batter. The only change I'd make in the future might be to increase the amount of cinnamon to 1 and 1/2 teaspoons and to throw 1/4 teaspoon of nutmeg into the mix. Overall: This recipe is excellent. I will make it again for sure. (This recipe was submitted in 2002. It was tested and photographed in October 2014.) 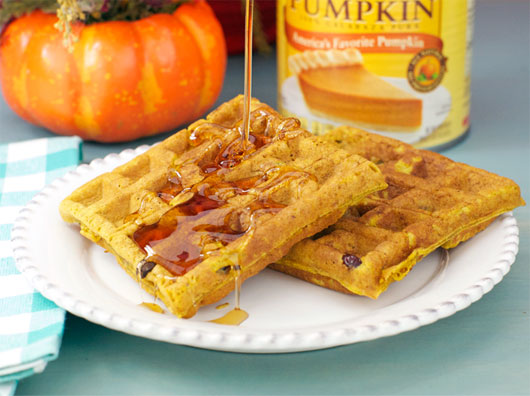 How To Make Cranberry Pumpkin Waffles

Place the flour, sugar, baking powder, salt, and spices in a large mixing bowl and stir with a fork until blended.

In a separate bowl, beat the eggs with the pumpkin puree. Stir in the cooled milk and shortening. Add to the dry ingredients and stir with a wooden spoon until well combined. Stir in the cranberries.

Preheat the waffle iron; this should take about 10 minutes.

Butter the preheated waffle iron and add about 1/2 cup batter. (It takes from 1/2 to 2/3 cup batter to make 1 waffle, depending on the size of your waffle iron.) Bake the waffles until they are golden and crisp. Serve hot. 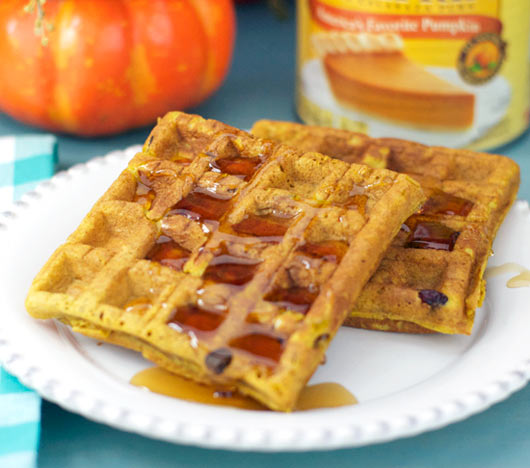 If desired, you could replace the ginger in this recipe with 1/2 teaspoon of freshly grated nutmeg.

I stirred 1 Tablespoon of canola oil into the batter at the very end so I wouldn't have to brush oil or use cooking spray on my waffle iron. It worked great. The waffles didn't stick at all.

This recipe made twelve 4 and 1/2 inch square waffles. I used just over 1 and 1/2 cups of batter for each batch of 4 waffles.

Two of the great tastes of Autumn come together in these family-favorite waffles. Great for the holiday season.


Comments About This Recipe
What do you think of Cranberry Pumpkin Waffles?
Overall Average Rating = 4 (out of 5)
Based on 3 votes.

From Dinky D.
Made them the morning after Halloween and they were great... crispy... lots of flavor. Thanks!

From 9loosfranl
I enjoyed these! I do like a little more pumpkin though.

From idara (Team Breakfast Member)
I got a good result with this recipe, but wow, so many ingredients and instructions that early in the morning! Do not attempt this recipe without caffeine! :)