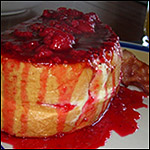 Make a pocket in each bread slice by cutting through center of top crust down into bread to within 3/4-inch from edges, being careful not to cut through sides.

In medium bowl, whisk together eggs with half 'n half until well blended. Dip each side of bread into egg mixture until well coated.

Melt butter in large skillet over medium-high heat. Place bread slices into skillet and fry both sides until golden brown and filling is warm, about 6 to 8 minutes.

Invite friends over for this one! It takes a little more work than your average French Toast, but it's worth it.

Mr Breakfast would like to thank eaat4@aol for this recipe.


Comments About This Recipe
What do you think of Stuffed French Toast with Raspberry Sauce?
Overall Average Rating = 4 (out of 5)
Based on 6 votes.

From Kimberly
Delicious! Thank you for sharing it! For a healthier spin I used mostly nonfat GREEK yogurt (my new favorite power food) with about half less cream cheese and used whole milk in place of half & half. Adds protein, little less fat. Delicious! (I don't recommend cutting back on the butter however!)

From goodcook
We made this with strawberries. Just use the exact directions but every time it says raspberries use (frozen sliced) strawberries instead. Delicious recipe. Thanks!

From Freshman
My sister described it as 'part jelly donut - part cheese cake'. By the way - for the topping we had no raspberry jam so we mixed in strawberry jam and that worked wonderfully.

It wasn't to pleasant, but maybe it was just me. I guess if you were to like it that way it would taste great. My daughter and husband loved it.

From duffbert
As long as you like all the ingredients this was very good. The ricotta cheese gives the filling a little grainy texture, but the filling has a flavor of some old European Danish recipes. Filling the toast is a challenge that turns it into a gooey mess... but most things that taste great (like this) are messy...

From doug31 (Team Breakfast Member)
I suggest adding a small dollop of Haggen Das Baileys Irish Cream ice cream and chopped walnuts to the recipe, by no means is it a bad thing!

Half and half is a mix of 1/2 whole milk and 1/2 cream, typically used as a more stable cream in coffee. It has a fat content of about 12% and is sometimes used to make ice cream.

What is half & half?

From Elaura H.
I tried it and I loved it. This dish rocked and the raspberry sauce was the perfect topping for it.