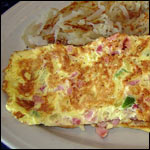 Cook the same as you would any omelette.

The recipe submitter was a little short on the instructions so here's what to do...

First, melt a Tablespoon of butter in medium frying pan over medium heat and saute the onion and green pepper until tender. Add the ham pieces.

Add the beaten egg. As the egg starts to set, left the edges of the omelette with a spatula so uncooked egg flows under to get cooked. When almost completely set, fold the omelet in half. Turn off the heat. Let the omelette set one minute before serving so the inside cooks through.

If desired, you could place 1/4 cup of shredded cheese over 1/2 of the omelette before folding. Or use 2 overlapping pieces of American cheese for a mid-America greasy spoon diner style Western Omelette.

The classic combination of diced ham, onion and green pepper in a folded omelette. If desired, fill or top with your favorite shredded or sliced cheese.


Comments About This Recipe
What do you think of Western Omelette?
Overall Average Rating = 5 (out of 5)
Based on 19 votes.

From Birdie
Also good as a patty on hamburger bun with mayo.

From J-Wolf
It was nice. Thanks for the recipe.

From Spice Is Nice
I made a Spicy Western Omelette by adding 1/4 of chopped jalapeno in with the onions and bell pepper and then I put shredded Pepper Jack Cheese in the middle. I'd recommend it especially if you like spicy foods.

From Andi K.
We loved this recipe. Thanks.

Add a little sharp cheese to the mixture and it's so good.

From A.D.H.
We make a version of this, except we also add diced tomatoes:) Very yummy.

How is this not a Denver omelette? Although, the picture shows browning which I don't think an omelette should ever have. Although, I have met some people who prefer it that way.

From M.W.P.
This recipe is so good. Simple, but superb.

From SeanO
Even though I live on the east coast. It's the best omelette all around! 5 out of 5!

From pinkpepper
Finish the directions like this and it turns out great: flip omelet over when almost set, place a slice of American cheese on one side, fold and serve.

From Britt
Its better with egg white... yum!

From BLACKBIRD UK
One year later, and I still find it very enjoyable.

From cowboy buddy
This was very good. I loved it.

From Carmee
I have to say, "it was very delicious."

From blackbird (uk)
We call this a Spanish omlette, never the less, very good. Thos.

From AddCheese
I made it for me and my dad... and I love it! I didn't add any onions but I added cheese and it tasted good.

From Pete
Exactly what I was looking for... GREAT!

From Very Great
This recipe is so good! I love it! I served it for breakfast, lunch, and dinner!

From lovely coffman
Thanks! I was so hard to look this recipe. This kind of omelet is so good... my husband likes it. Thank you!