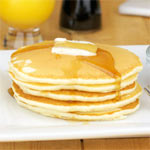 (4 servings)    Printable Version
This is a good go-to recipe for buttermilk pancakes. I like this one because everything reacts just like it's supposed to. When the recipe says that bubbles will form and burst on top of each pancake, that's precisely what happens. Some other recipes say the same thing, but because of a thicker or thinner batter, those pancakes are under or over done when you go to flip. This recipe does everything it's supposed to and tastes just like you hope it will. Nothing out of the ordinary, just delicious, tender buttermilk pancakes. (This recipe was submitted in 2002. It was tested and photographed in September 2013.) 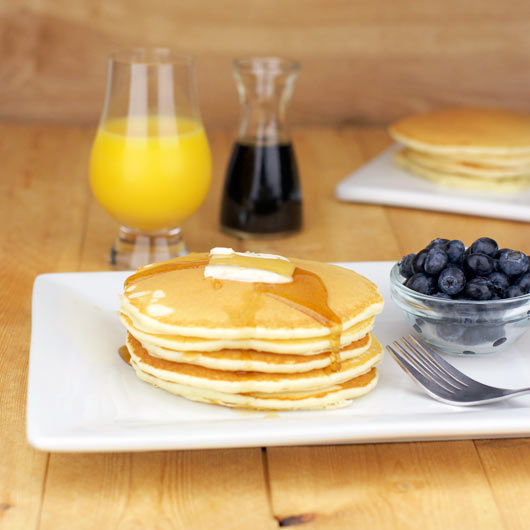 How To Make Basic Buttermilk Pancakes

In a large bowl, mix together the flour, sugar, baking powder, baking soda and salt.

In a medium bowl, beat the egg until the whites and yolk are combined. Add the buttermilk and oil and stir to combine.

Add the wet ingredients to the dry ingredients and whisk to combine. (Try not to over-mix. 5 seconds should do the job. It's okay if there are a few lumps.) For best results, let the batter rest 10 minutes before making pancakes.

Place a griddle or large frying pan over medium heat. Spray with cooking spray (you can also use a scant amount of butter).

Dollop the batter in 1/4 cup amounts per pancake. When the tops are covered with small bursting bubbles, flip the pancakes and cook the other sides to golden brown. 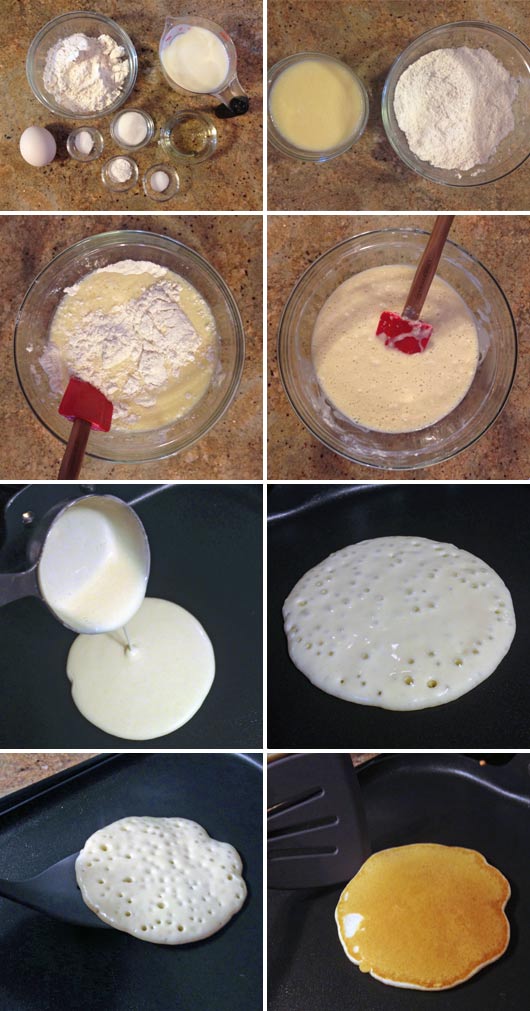 Cooking Note: The trick to getting golden brown pancakes with even coloring is using as little oil while cooking as possible. I usually spray the pan with cooking spray and then immediately wipe out that spray with a paper towel - leaving the thinnest, invisible coating. That's really all the oil you need to cook with to make excellent pancakes. 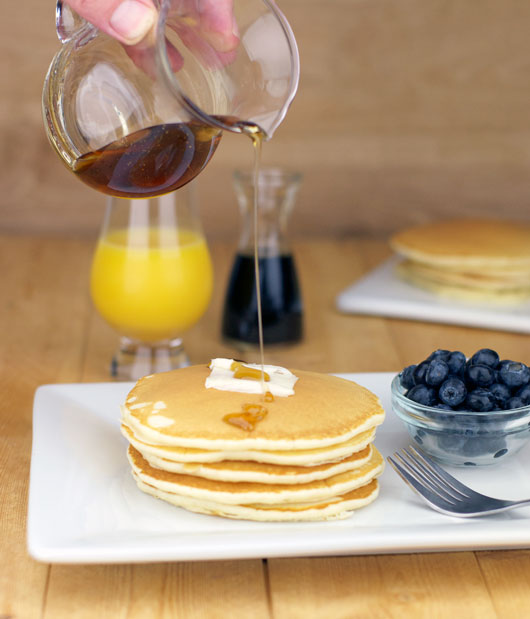 
Comments About This Recipe
What do you think of Basic Buttermilk Pancakes?
Overall Average Rating = 5 (out of 5)
Based on 22 votes.

From Mary12
My grandchildren loved them!

From micherrera (Team Breakfast Member)
Very yummy. My challenge with cooking them was trying to get the heat level on my frying pan just right. I burned two. I am not a very good cook. Recipe is a keeper!

From Cakemix
This is my go-to recipe for pancakes!

From RecipeMama
Best pancakes we have had! Thank you for the delicious recipe! Note: We doubled the recipe and used 1 cup flour + 3/4 cup wheat flour... delicious!

From Kenny G2
We thought they were fantastic!

From Day Wizzard
This recipe was only kind of okay. The batter was too thick. The recipe on your site called "Homemade Pancakes" was way better. That was the one I was looking for. My mistake.

From speck
I've used this recipe a couple times now and have always had good results. I do add a few drops of vanilla as well.

From lefleur
These pancakes are so good! They are just what you need on a good Sunday morning!

From Sylvia (Team Breakfast Member)
This is now our only recipe for pancakes!

I love to cook pancakes too. I have a pancake blog: http://teethepancakeman.sosblog.com

These turned out a little thin and floppy at first. I added about another 1/3 cup of flour and a pinch more baking soda and they turned out much better.

From Phil
I keep powdered buttermilk on hand and it does a realy good job. I put that in and use regular milk. Never fails me.

From By Model
I love the way you gave your recipe instructions. On a different page it was all messy you couldn't understand anything! But i say this recipe is a great one & you should keep this one!

From lourdesg (Team Breakfast Member)
I tried it this morning but realized I ran out of baking soda. Annoyed that I had to make a trip to the market but was glad I did. The pancakes were a hit with the kids. I used the recipe for making my own buttermilk using one cup milk and 1 tablespoon vinager then waited 15 minute for milk to turn to buttermilk. This recipe is a keeper.

From Shanny
LOVE IT. But I used milk instead of buttermilk since I didn't have any on hand. It was great!

Yes, I will definitely add blueberries too. Thanks for sharing.

From Isabela
OMG this are awesome!!!!!!! Thanks for sharing!!

From raul6763
These were light, and tasty one word YUMMMMMMMY.

From Calypso
This is a fantastic recipe, we add some blueberries too!