These are the original instructions from a 1962 magazine ad for Aunt Jemima pancake mix:

"Just about the best breakfast that ever greeted a hungry family! And it's as easy as this: Shake up Aunt Jemima batter according to package directions. Place cooked bacon strips on the griddle and pour batter over each strip. Bake 'em golden brown on both sides. Couldn't be easier - couldn't taste better! How about Aunt Jemima Bacon Strip Pancakes at your house tomorrow!" 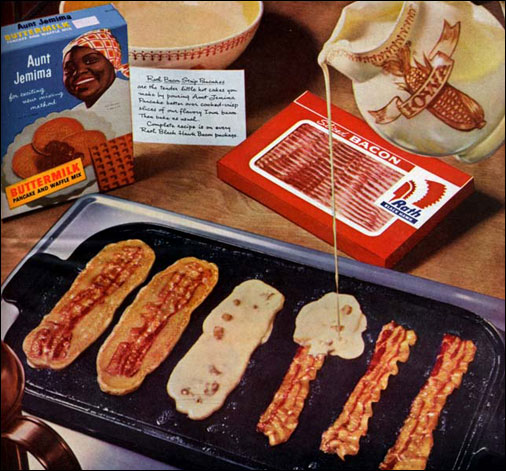 Prepare the pancake batter with slightly less water or milk than instructed. A thicker batter will help prevent the pancakes from flowing into each other.

Set your griddle to medium-high.

Fry the bacon until crispy. Remove the bacon from the griddle and lay slices on stacked paper towels to remove excess grease (and to get more crispy).

Carefully, wipe down the griddle with wadded paper towels, leaving only a very thin layer of grease to cook the pancakes.

Return the cooked bacon to the griddle with at least two inches of space on both sides of the slices. (You'll probably have to work in two batches.)

Slowly pour batter over each bacon slice. After one minute, check the bottom side of the pancakes. Once browned, flip the pancakes and cook the other side to golden brown. 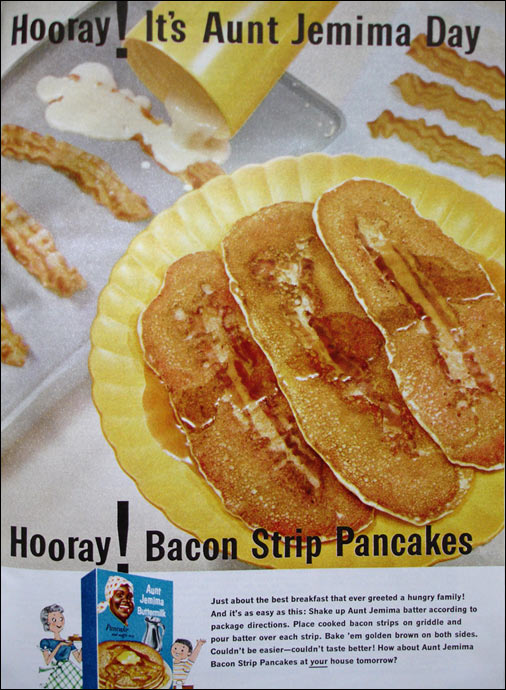 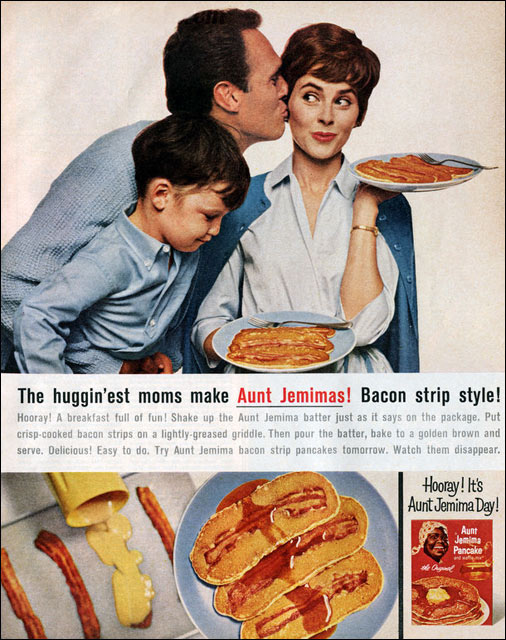 This is a classic recipe that appeared in magazine ads for Aunt Jemima pancake mix in and around 1962.


Comments About This Recipe
What do you think of Bacon Strip Pancakes?
Overall Average Rating = 5 (out of 5)
Based on 42 votes.

View all 54 comments for this recipe.

From Cecll
Made it. A fun way to do pancakes and much less bacon consumed so also good. Flip them over and you see the bacon strip so a cute presentation as well.

From Jaffy
Great Idea. I can imagine a million other things I may put onto my PANCAKES. WOW! WOW! WOW!

You could use any pancake batter recipe with this.

From Jake & Finn
That is so cool! Everyone should try it!

From Shannon R.
Makin' bacon pancakes is the BEST!

From Captain
These are the best. I prefer to lay down some pancake first, then the bacon, then more pancake to fully encase the bacon in pancake.

From Marnie
Can I marry this recipe?! So awesome! I don't care what they're saying about bacon. This is the best.

I'm so happy I found this. Gonna make this weekend. Thanks!

From W. Boss
Loved this!

From L.S.P.
Making pancakes, making bacon pancakes. Take some bacon and I put it in the pancakes... that's what I'm gonna make! Bacon PANCAAAAAAAAAAAKES!!!

From Anji
@CAJ... Awesome Idea! Gonna use that tip!

From MmmGood
I think it's awesome how many people know the makin' bacon pancakes song!... PS... these are delicious!

From nmrawker (Team Breakfast Member)
Duh Metalamigos - the recipe calls for cooking the bacon first. Your mom did not screw it up!

From Marie
Geesh, this was rocking!

My mom screwed it up by cooking the bacon first and then trying to use fully cooked bacon.

From Initial T.
It is flat out great.

View all 54 comments for this recipe.