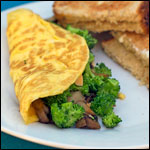 (1 serving)    Printable Version
Here's an omelette that's loaded with good stuff. The recipe was was submitted to the site over a decade ago in 2002 by "dakota". It took a while for me to try it, but I'm glad to report that it was delicious and filling. I made mine (February 2013) with a slice of American cheese. There was easily enough filling for two omelettes. As you can see in the picture, the omelette was a bit overloaded. In this case, too much of a good thing was a very good thing.


How To Make A Broccoli Mushroom Omelette

Steam the broccoli until tender. Set aside.

In a frying pan over medium heat, melt about 1 Tablespoon of butter, add the mushrooms and garlic. Saute - stirring occasionally - until mushrooms are browned.

Beat the eggs with the milk and salt and pepper. Transfer garlic and mushrooms to a small plate. Set aside.

Pour the egg mixture into the frying pan. As the egg starts to set, lift the edges of the omelette with a spatula so uncooked egg flows under to be cooked.

When the top is nearly set, sprinkle grated cheese down the middle. Top that with the broccoli and garlic-infused mushrooms. Fold the omelette and let it cook 1 to 2 more minutes or until cheese is fully melted. 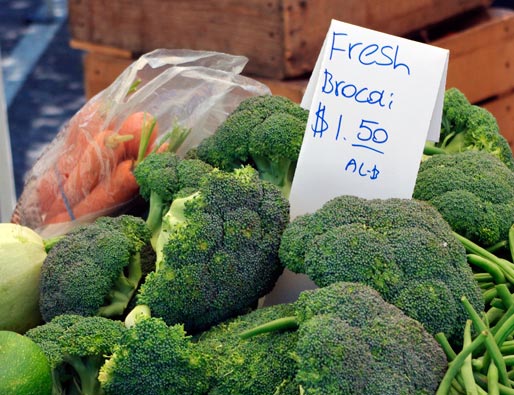 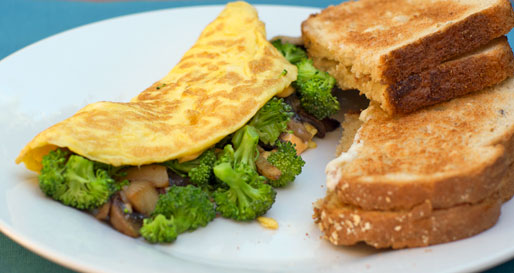 This omelette features broccoli, mushrooms, garlic and your choice of cheese. I prefer Swiss for this recipe, but Cheddar and Mozzarella work equally as well.

Mr Breakfast would like to thank dakota for this recipe.


Comments About This Recipe
What do you think of Deluxe Broccoli Mushroom Omelette?
Overall Average Rating = 4 (out of 5)
Based on 4 votes.

From Wynne SF
I thought it was pretty good. I don't usually put broccoli and breakfast together in my mind, but it worked. I skipped the garlic.

From Phylicia
If you use 3 eggs you get a bigger omelette that holds the filling better. It tasted very fresh - good combination of flavors. - Phylicia in Charlottesville, VA

From driver8
That was one of the most delicious things I have ever ate . But the broccoli was a little hard. So a rated it very good instead of awesome :{)

Where does the butter come in?

I didn't really like it. The Broccoli wasn't so good imo.