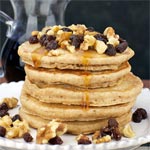 (4 servings)    Printable Version
This recipe is dairy-free and egg-free. It's also hassle-free and I didn't miss the eggs or milk much at all. I was surprised how fluffy these get for a whole wheat pancake. It's important to sift the dry ingredients. That added bit of air helps keep them from getting too dense. I might suggest adding a teaspoon of vanilla or a pinch of cinnamon to the batter to get a bit more flavor, but if you want your pancake topping to be the star, these are really good as written. (Recipe tested and photographed in August 2013.) 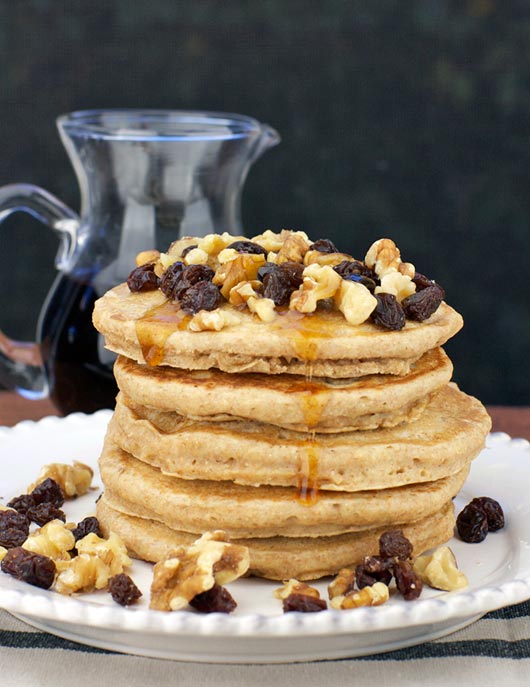 Sift all dry ingredients together. Add apple sauce and water and mix until batter drips from spoon (but not too runny).

Heat frying pan and spray with low-fat cooking spray. Dip your finger in some water and flick it onto the surface of the pan. If it sizzles, go for it.

Makes about 7 or 8 cakes 4-inch pancakes.

Ladle about 1/4 cup of batter into the pan and let it cook until small bubbles form in the center. Flip. Keep completed pancakes warm in a preheated oven covered with a paper towel to keep the moisture in. 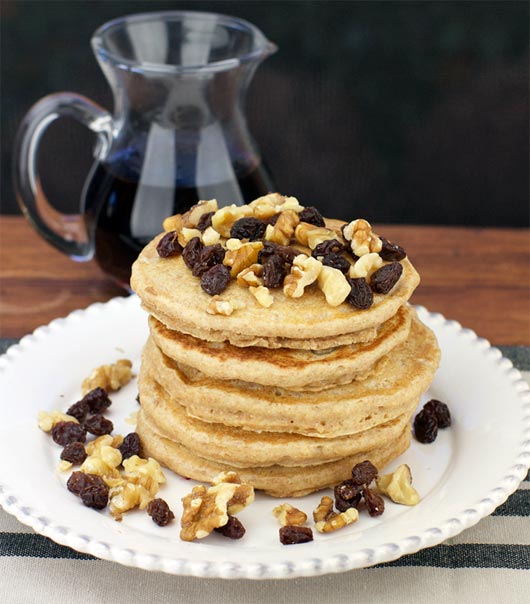 If desired, you can replace some or all of the water with milk. For more flavor, consider adding a teaspoon of vanilla when you stir in the applesauce. A teaspoon of cinnamon mixed into the dry ingredients is also a nice touch. Some people have commented that replacing 1/4 cup of the whole wheat flour with all-purpose flour helps give the pancakes a more familiar, less-crumbly texture. 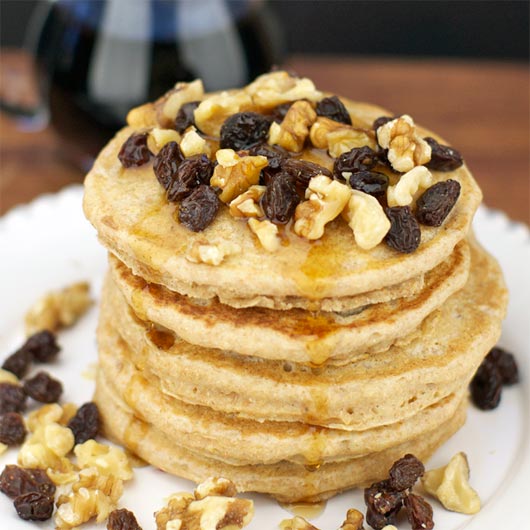 Serve with a low-fat butter substitute and low-fat maple syrup. For a special treat, make the batter with either 1/2 cup walnuts or 1/2 cup blueberries.


Comments About This Recipe
What do you think of Low-Fat Whole Wheat Pancakes?
Overall Average Rating = 4 (out of 5)
Based on 28 votes.

View all 28 comments for this recipe.

From Connie C.
A little more tender or crumbly than all-purpose flour pancakes, but the taste was right on. I'll make these again.

From Mary
Turned out great! I followed some of the reviews and used milk instead of water. I also added a bit of vanilla and used buttermilk. Amazing!! Very healthy and low fat!

From ladyluckVA (Team Breakfast Member)
I replaced just 1/4 cup of the wheat flour with all-purpose per the other peoples comments and we thought they were great.

From S. Cali
I agree with Nadette. If you just replace a little of the whole wheat flour with all-purpose, the consistency is a lot better and the taste is better.

From Fitange (Team Breakfast Member)
I'll make these tomorrow but use skim milk with a tbsp of vinegar to make buttermilk, and I'll add stevia instead of brown sugar. Then I will add sweet potato and a few pecans.

From Nadette P.
These are better if you use 3/4 cup wheat flour and 1/4 cup all-purpose flour. You get a better batter constancy. I agree with other comments about a little more sugar and hint of vanilla.

From slachs (Team Breakfast Member)
I also increased the brown sugar to 2 Tablespoons and added a dash of vanilla. Good for a simple, whole-wheat pancake.

From DeeDee333
I added 2 tbs of brown sugar instead of 1, fat free milk instead of water, added an extra tablespoon of apple sauce and a teaspoon of honey... very good!

From kfears (Team Breakfast Member)
Not impressed at all. I debated subbing out the water for milk and really should have. These were very plain. Couldn't taste the applesauce at all. I threw them away.

From Coach
These were great!! I love pancakes and will be making these from now on!!

From LonghornJ
I made the changes some reviewers suggested: 2 Tbs brown sugar (instead of 1) and used fat free milk instead of water. I also added half a banana to the batter once it was on the griddle. Sooo good! The batter was a little thick, but I didn't sift ad I just added some water to fix it. Again, I thought they were wonderful and better than regular pancakes as well as better for you! Thanks for the recipe! :-)

From Maria
Delicious pancakes! I'm a pancake lover so I am glad there is a healthy option. I added flax seed to the batter (for health, not taste) and I always use sugar free maple syrup. Yum :-)

From ShortcakeNinja (Team Breakfast Member)
Great recipe! I used low fat (1%) milk instead of water and used 2 tbsps brown sugar instead of one. The consistency was perfect. We used a little bit of both low fat margarine and powdered sugar as a glaze and topped with sliced bananas. It seemed like this recipe only made about six pancakes (2 for each person-therefore three people). However, I'm sure it woud have made more if I had made them a bit smaller. Wonderful way to add whole wheat into your diet. I will definitely make these again!

From Breakfastrules
As prepared these are OK; I like them sweeter (doubled amount of brown sugar) and fluffier (used 1/2 part skim milk in place of 1/2 part water - you''ll need to add just a bit more water to get the batter to the right consistency this way) as well as 1 tsp Vanilla extract. Also used 1/3 cup blueberries.

From kelly
I thought they were practically the same as regular pancakes! thin batter fyi*

From picky
Texture was good, but the taste wasn't great. I like a little sweeter pancake experience. Maybe I'll try some of the suggestions here and add some fruit.

From Emily
I added some flaxseed and bananas. It was okay, pretty good. The consistency was fine, I just prefer a little sweeter.

View all 28 comments for this recipe.