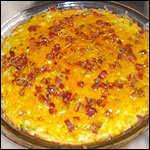 Return to oven and bake 25 minutes or until knife inserted near center comes out clean.

If desired, you can add a couple Tablespoons of finely chopped peppers or onions to the egg mixture for more of a garden fresh flavor.


Comments About This Recipe
What do you think of Breakfast Hashbrown Casserole?
Overall Average Rating = 5 (out of 5)
Based on 20 votes.

From Rappinghood
This is like something that I could probably eat for every meal, every single day!

From Carlos Danger
Add 1/4 teaspoon dry mustard and 1/4 teaspoon paprika and it makes it even better... maybe a little black pepper too. Also, I agree with the other guy about the butter. All you need is 1/2 cup.

Does anyone know if I could put this in a crockpot to make it?

From XenaBob
I love this recipe! I don't worry about the quantity of hash browns, I just use a bag full. I've also add 2 more eggs, 1/2 cup more milk and a little extra salt. Sometimes I use ham, sometimes sausage links, sometimes a roll of sausage. And whatever cheese I have on hand.

I use tots in the freezer bag and chopped them as hash browns for breakfast sometimes.

From The Lundens
Added 2 more eggs like someone in the comments did and it turned out really good. Got good reviews from my family. Thanks! Oh... I also added half a small onion (chopped) which I sprinkled over the crust before the ham. It added a nice flavor.

From MammaBear
I added an extra 2 eggs the 2nd time and used bacon and ham. Easy and delicious and a lot of fun to play with!

Can this casserole be made ahead of time and frozen?

From I. M. Dana
For the best results, you should squeeze every last drop of liquid from the thawed potatoes before adding them to the pan. I've been making this for years now and everyone always ravs.

From my kids mom
This is truly a wonderful dish and very easy to make. I also added an extra egg and a little chopped onion. Delicious!!!

From RRC78
I made it with sauteed peppers & mushrooms. I cut the butter to 1/2 cup and used 5 instead of 4 eggs. Was easy and delicious.

From Duffy
Chop up a small onion and a small green pepper and add one more egg and this is amazing. I might saute some mushrooms and add that to next time too.

From Thorn
Have made this using fresh potatoes as well as with frozen. It's great with mushrooms and onion. We've also made it with chicken. Really great recipe with lots of possibilities. We do use a bit less butter though.

From emarie
Yes, I made it with fresh potatoes, reduced butter to 1/4 cup (come on, 2/3 cup, really?), added onion and green pepper, used cut up sausage links. DELICIOUS!

From fresh not frozen

Can you make this with fresh potatoes instead of frozen?

From Mothe52 (Team Breakfast Member)
Good breakfast casserole. May try with bacon next time. Added diced green peppers and onions to half!

From Pump U.
Try it with bacon - cooked and crisped - instead of the ham. Deee-licious!

From shelly/atlanta
This is a nice basic recipe! I fatted and nastied it up with sour cream, extra eggs, a can of mushroom soup and way too much cheese, but it was pretty darn good. The ham is a good choice- next time I'll add sauteed mushrooms and green onions too - I like the hash brown crust!

From Sweet Cheeks
I made this for work and everyone loved it!

From Indiana007
This was extremely good. I exchanged ham with bacon. Good inexpensive dish for a crowd.