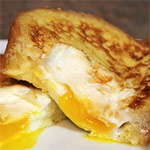 (1 serving)    Printable Version
The term 'bird nest' refers to a classic family breakfast called Birdies in a Nest (aka Egg In The Hole) where an egg is fried inside a piece of toast. In this case, the eggs are cooked inside French toast. This recipe is more fun in theory than in actuality. There's no reliable way to know if the egg whites are fully cooked until you start eating. I got lucky and my whites were cooked through leaving a little bit of runny yolk. I used syrup as a topping. It tasted terrific, but I kept thinking I would prefer my French toast and eggs separate. It's a cute trick making a fried egg in a piece of French toast, but the finished dish is a bit awkward. Unless you're a person who traditionally drenches your eggs in syrup, I recommend making your eggs and French toast separately. (This recipe was submitted in February 2015. It was tested and photographed in March 2015.) 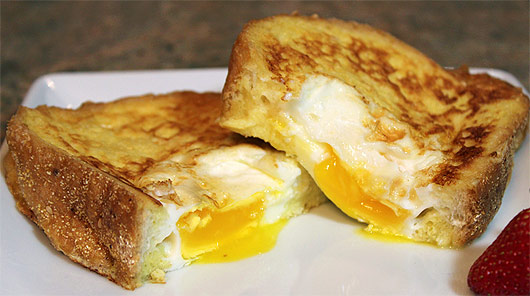 Cut or tear a hole in middle of the slices of bread.

In a wide shallow bowl or pie plate, whisk together 2 of the eggs with the milk, sugar and salt.

Over medium-low heat, heat griddle or skillet coated with a thin layer of butter or margarine.

Place the bread slices, one at a time, into the bowl or plate with the egg and milk mixture - letting slices soak up mixture for a few seconds, then carefully turn to coat the other side. Repeat with the other slice of bread.

Transfer bread slices to griddle or skillet, heating slowly until bottom is golden brown. While this side of the French toast is starting to cook, carefully drop one of the remaining eggs (out of the shell) in the hole you made in the bread. Repeat procedure with other slice of bread.

Finish cooking by flipping until the egg and French toast is cooked to your liking. 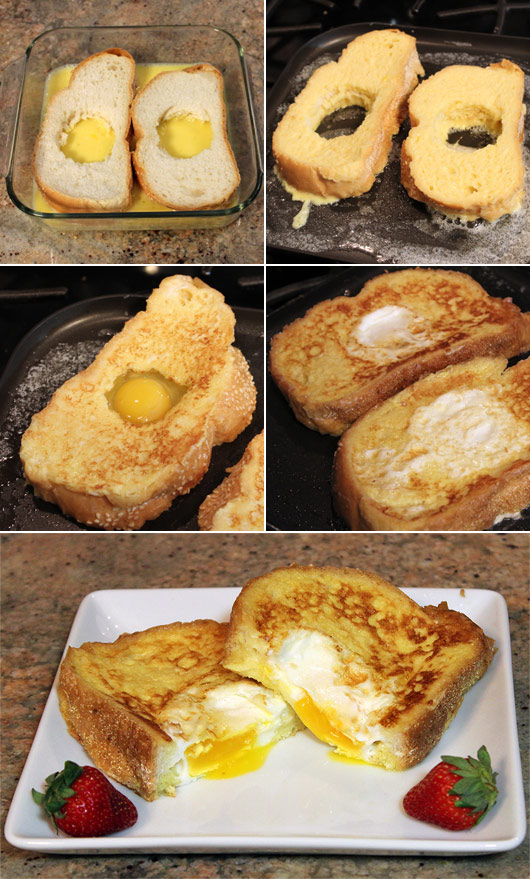 This is Birdies In A Nest (aka One-Eyed Sailor) with a fun twist in that the bread is treated like French Toast.


Comments About This Recipe
What do you think of French Toast Bird Nests?
Overall Average Rating = 4 (out of 5)
Based on 2 votes.

From My Tip 4U
We like it just like this. We use a ball jar and twist a hole in the bread right after we put the dipped bread into the skillet. Works perfect.

From bazinga
Was good, but I agree with what you say at first... French toast with eggs on the side is better.