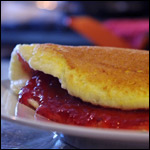 Separate the egg yolks from the whites. In a large bowl, beat the yolks until thick and lemon colored. Add salt, sugar and water and stir to combine.

In a separate bowl, beat the egg whites until stiff and dry. The whites should barely slide if the bowl is tilted.

Heat an oven-safe 10-inch omelet pan or skillet over medium heat. Butter the sides and bottom of the pan.

Add the combined mixture to the pan. Spread evenly with a spatula. Cook for 3 to 4 minutes. Gently lift the omelet's edge with a spatula after 3 minutes to check for doneness.

When well "puffed" and delicately browned underneath, place the pan in the center of the oven to finish cooking the top. The omelet is cooked if it is firm to the touch when pressed by the finger. If it clings to the finger like the beaten egg white, it needs to cook longer.

Spread desired amount of jam, jelly or marmalade over one half of the omelet. You may be tempted to use more jam than is listed. Resist. Too much jam will create a delicious, drippy mess.

Fold the uncovered half of the omelet over the jam. Turn out onto a plate and sprinkle with sugar. 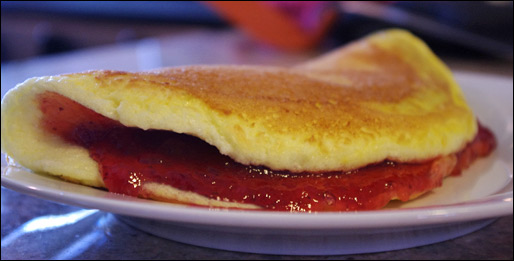 This is an updated and slightly modified version of a classic recipe from Fannie Merritt Farmer. The original recipe appeared her book The Boston Cooking School Cook Book, published in 1896.

The desert or sweet omelet has been popular for over a century. It's only in the last couple decades that it's gone out of vogue. This simplest version of a sweet omelet should encourage modern-day omeleteers to broaden their scope of possible omelet fillings. When a sweet filling is used in moderation, this type of omelet can be a unique breakfast option.

This is considered a "puffy" omelet. Stiffly beaten egg whites help create an omelet nearly double the size of an omelet where the whites and yolks haven't been separated. The texture of the egg is delicate and fluffy.

If the idea of jam and eggs doesn't appeal to you, try filling this omelet with savory fillings like cheese to experience the unique texture of the puffy omelet.

This fluffy, puffy sweet omelet is return to days gone by when berries and jam filled omelets as commonly as cheese. This recipe is an interesting study in what's possible in the realm of omelets.


Comments About This Recipe
What do you think of Jelly Omelet?
Overall Average Rating = 5 (out of 5)
Based on 9 votes.

From jimmiles06 (Team Breakfast Member)
I had never heard of a Jelly Omelet before watching Hazel several years ago. Today, while watching the Hazel episode again I decided to check it out. Thanks for having this recipe here for us.

From Mike
Thank you! My recipe search was inspired by the Hazel episode as well!

I can't wait to try it! I'm watching that episode of Hazel now.

From Maureen
The name of that "HAZEL" Episode is: "AN EXAMPLE FOR HAZEL". These are the sort of Recipes that have long fallen by the way side. I haven't gotten the chance to make one, because other time as lately has bee devoted to other dishes but after the Holidays I plan to make a "Jelly Omelet", but I'm going to save my appetite to eat the whole thing myself. By the way, on "Hazel", "George" must not have ever had a "Jelly Omelet" because it is true that too much Jam will dissolve into a sticky liquid mess all over your plate. Pretty much like Pancake Syrup.

From Lisa14
@Nora, I also heard of the recipe on Hazel, the TV series. Can't wait to try it.

From Jennifer S.
My dad used to make sweet omelets for us as kids, only the inside was half jelly and half brown sugar.

From Mr. K
All my friends look at me like I'm crazy when I tell them about jelly omelettes! Our Dad would make them for us back in the '50s and '60s. In all my years, I have only found them on the menu at one place (forgotten). I'm going to use this recipe for my up and coming granddaughters up at camp when they visit. Thanks!

Funnily, the first time I ever heard of a Jelly Omelette was on the "Hazel" TV show from the 1960's. I recently viewed a rerun where the cousin asked for a Jelly Omelette. I had to look it up. Definitely not something I would make. I can't bare a sweet filling with eggs. That's just me.

From EmC
I read about a jam omelet in a Dorothy Sayers (Lord Peter Wimsey) novel, and of course, I had to google it and enjoyed your recipe. In the book, the jam is warmed before being added to the omelet. Delicious!

From Sooni
Very good recipe! I used too small a pan and ended up with a very thick omelet that was difficult to fold, but in all other respects, it came out well. Indeed, not too much jam was needed, and it was delightfully fluffy and sweet. I followed the detailed instructions carefully and was well-rewarded for my efforts.

My mum used to make these for me when I was a kid and I loved them. As an adult, they don't appeal to me.

From pmccluer
Thank you! Loved it!