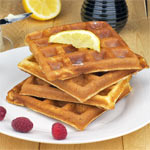 (4 servings)    Printable Version
In a medium bowl, beat egg yolks with the sugar and salt. Blend in the milk, lemon juice, lemon peel, and butter, beating well. Add the flour and baking powder. Beat egg whites until stiff and fold into batter. As usual, bake in a preheated waffle iron until golden brown and steam no longer escapes iron. 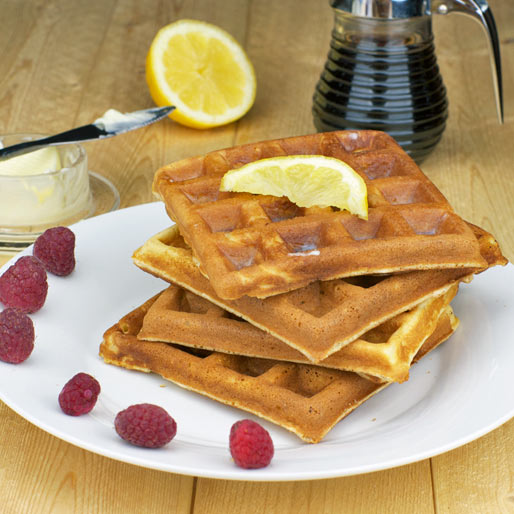 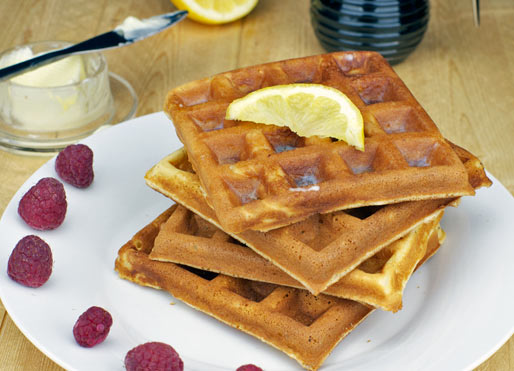 This is a great breakfast treat. If you don't want maple syrup, try topping with fresh berries and lemon yogurt. Yummmmmm!

Mr Breakfast would like to thank dlohr for this recipe.


Comments About This Recipe
What do you think of Lemon Waffles?
Overall Average Rating = 5 (out of 5)
Based on 13 votes.

From Marnie
Thought they were great.

From Barefoootmom
Made these yesterday morning and served them with Maine blueberry syrup. They were DEVINE! Even plain, they had plenty of flavor. Will definitely make these again!

Can't wait to try it!

From SLOgirl
Always a crowd pleaser! Light and very flavorful.

From HullaGirl (Team Breakfast Member)
These were really,really good. Not too sweet, just in time.

From GardenMomma
Absolutely yummy. The flavor was incredible. We served these for Mother's Day Brunch with a homemade strawberry syrup. This recipe is a definite keeper!

From BellaChinchilla
Light and tasty.

From Fantastico
I tried this recipe before and I think it was really awesome! Even though I never use the waffles iron, while I use the sandwich grill it taste delicious. I let my friend try it, they all say it taste soo good that they call me to do again but I was too lazy and I told them next time I will do it for them again. but I find it a little bit too much egg that the egg cover the lemon smell but never mind I find it really good so i would like to give this recipe 5 out of 5. I taste really fantastic. I like it very much.

From naturewalker (Team Breakfast Member)
This truly is awsome! My ten year old can do it! I doubt IM 12 has really tried it!!! As for the reader without waffle Iron- A standard Sandwich grill works just as well! Only it si a bit messy!
MomOf2

From Im Mom
My 10 year old has been cooking for 3 years. I think "Im 12" should try something new! Like getting rid of yucky, nasty, bad for you, Ego Waffles and trying home made!

This is just a bit difficult for a 12 year old to make alone, so I prefer to stick a waffle in the toaster and put a small slice of butter on it =) but this seems yummy = )

They look soooooooo nice and scrummy, but we don''t have a waffle iron:(

From Thumbs Up
Yummy!!

It looks so delicious, taste like it too. :P. I guess you have another satisfied customer.