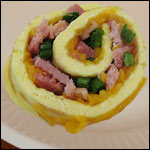 (4 servings)    Printable Version
Preheat oven to 450 degrees. Prepare a 9x13 baking pan by spraying the inside generously with cooking spray.

In a medium bowl, beat the eggs with the milk until frothy. Add the flour and seasonings and continue to beat until well-combined. Pour mixture into the prepared baking pan.

Bake for 15 minutes until egg is nearly set.

Sprinkle the shredded cheese, chopped ham and green onion evenly over the top. Bake for 3 or 4 more minutes until the cheese is melted.

Remove from oven and let set about 1 minute until the egg is still very warm, but safe to touch.

With a spatula, carefully loosen and lift the egg at one of the short sides of the pan. When you've lifted enough of the omelet to work with, start rolling it towards the other short side of the pan - using the spatula, if necessary, to loosen any parts of the omelet stuck to the pan.

Transfer the omelet roll-up to a serving platter and cut into 4 equal portions.

This is a fun, different take on a standard ham and cheese omelet. Kids love anything rolled up, so it's a nice way to get finicky kids to eat breakfast too.


Comments About This Recipe
What do you think of Baked Ham & Cheese Omelet Roll-Up?
Overall Average Rating = 5 (out of 5)
Based on 7 votes.

From Turnthpage
Didn't roll mine. I left it like a pizza and added chopped mushrooms. Easy and awesome.

I was wondering if this recipe works good in a frying pan? I wanna try tomorrow ;)

From kirk
This was very good with sausage. It broke just a little as I tried to roll it. I'll be more careful next time.

Fun. You can also make this in a frying pan.

From SSG
Mine started rolling up on the edges. I used chicken, ham, onions, and LOTS of cheese! It was tasty and amazing... I also cooked it at 475 instead, but it worked and didn't burn at all.

From tracey (Team Breakfast Member)
My residents love this recipe!

From haha
It's delicious! I LOVE it!

From Da Club
Awesome! Just awesome! I would have never in my wildest dreams cook eggs in the oven. Excellent! Keep it up!

From jacki
Good stuff with crumbled bacon in place of ham. Got the recipe from your facebook group. Fun. Thanks!