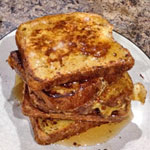 (4 servings)    Printable Version
This recipe can be made with either a vanilla bean or vanilla extract. If using a vanilla bean, slice it down the middle and scrape out the small seeds. The seeds are then stirred into the egg and milk mixture mentioned soon.

In a large bowl, beat the egg yolks with the milk and heavy cream. Add the cinnamon, vanilla (seeds or extract) and sugar and mix well.

Soak each bread slice thoroughly in the egg mixture.

On a skillet or in a fry pan set to medium heat, melt about 1 Tablespoon of butter. Fry both sides of each bread slice to a beautiful golden brown - about 1 minute per side.

Transfer to the oven and cook for 4 additional minutes.

Tip: The success of this recipe depends a lot on the quality of the bread you use. A rich, somewhat-sweet, rustic bread works best. And that bread works even better if it's slightly dry so it can absorb more egg custard. I wouldn't recommend using regular white or wheat sandwich bread for this recipe.

This french toast is fantastic with butter, maple syrup and caramelized bananas. You can use either a vanilla bean or vanilla extract in the recipe.

Mr Breakfast would like to thank sforhero for this recipe.


Comments About This Recipe
What do you think of Vanilla Bean French Toast?
Overall Average Rating = 5 (out of 5)
Based on 1 vote.

Came put horrible - even my dog did not want it

From johnlove
Awesome! Made it with French bread and it was super good.

From Where da bean?

Perhaps I just don't see it, but where are the vanilla beans?