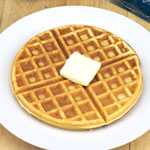 In a separate bowl, beat the egg whites to stiff peaks.

Fold 1/3 of egg whites into batter, then fold in second third. Once incorporated fold in the last of the whites.

Cook according to the instructions for your waffle maker.

Tip: In addition to the optional vanilla, you could also add a 1/4 teaspoon cinnamon or a pinch of freshly grated nutmeg to this recipe. Just don't flavor them too much... they'll get a ton of flavor when you drizzle them with tasty maple syrup.

Perfect for weekend mornings, these waffles can be frozen for later in the week too.

Mr Breakfast would like to thank woodseyspirit for this recipe.


Comments About This Recipe
What do you think of Waffle House Waffles?
Overall Average Rating = 5 (out of 5)
Based on 7 votes.

From Shea31 (Team Breakfast Member)
These are good but nothing like Waffle House. Someone asked if Waffle House puts in this much effort. Much more, actually. They also use sugar and malt, plus various other ingredients. How do you think they became famous for their waffles?

From Sailor
Very good! I will definitely make them again. I wonder if Waffle House actual puts this much effort into making their waffles.

From Dankind
My favorite waffle recipe.

Can you make these waffles without milk?

From FormerlyFrance
Needs just a little vanilla (1 teaspoon) and a pinch of salt. They came out light and crispy... just the way I like 'em!

Very good waffles! The secret is the egg whites. If you are patient with them, you will have fluffy waffles!

From MKH
I needed to be more patient with the egg whites, mine had good flavor but not fluffy at all.

From b00m3r
These waffles turned out beautifully. My waffle iron is a smaller size and the batter made 10 waffles.