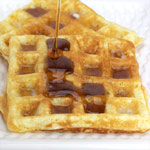 (3 servings)    Printable Version
I like this recipe because it makes yeast waffles that don't require hours of resting the batter as many similar recipes do. With just 40 minutes of resting, the amount of batter increased in volume and the texture was very light. As the waffles cooked, they smelled yeasty. But they didn't taste yeasty. You could definitely taste distinctive buttermilk in each bite. I cooked these waffles on the highest setting so that they'd be nicely crisped on the outside. The insides were very light and airy. (This recipe was submitted in 2009. It was tested and photographed in March 2014.) 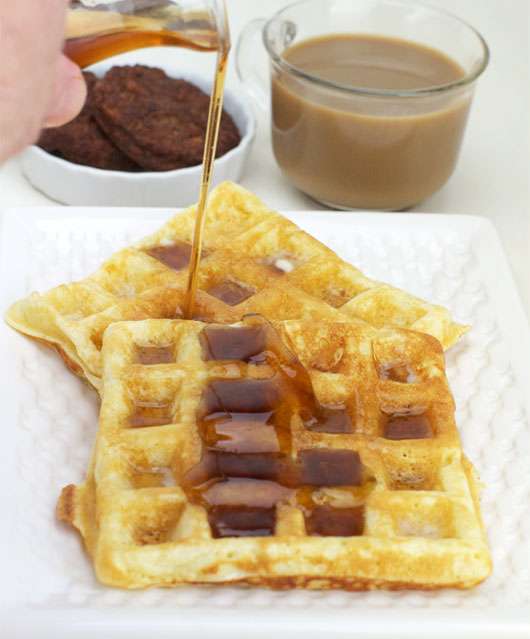 How To Make Buttermilk Belgian Waffles

Sift together the flour, sugar and salt in a bowl and set aside.

In a separate bowl dissolve one yeast packet in luke warm buttermilk. Separate 4 eggs, keeping the egg whites in a separate bowl. Egg yolks should be beaten and then mixed with the buttermilk and yeast mixture and add the vanilla here too.

Add the flour mixture to the egg yolk/buttermilk mixture and stir. Then stir in the melted butter. Now beat the egg whites until they are stiff and "peaked" and then fold them into the batter. Let the batter sit 20 - 45 minutes.

Scoop about a 1 to 1 1/2 cup in the the Belgian waffle iron. Batter is thick so it is easy to spread along the iron. I have a flip top so it's about 2 minutes baking each side. 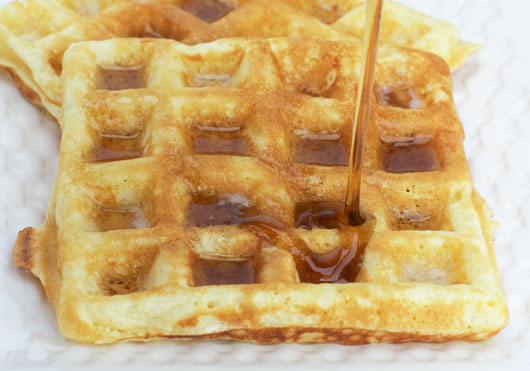 For the waffles you see pictured here, I used a Cuisinart 4-Slice Belgian Waffle Iron. For each set of 4 waffles, I used about 1 and 3/4 cup batter. Once the batter was poured on, I quickly spread it over the dimpled plates with a spatula. This recipe produced enough batter to make 12 waffles.

These waffles come extremely high, great texture, and melt in your mouth. Serve topped with whatever you prefer.

Mr Breakfast would like to thank RunningFool for this recipe.


Comments About This Recipe
What do you think of Buttermilk Belgian Waffles?
Overall Average Rating = 5 (out of 5)
Based on 2 votes.

From Norcalnewb (Team Breakfast Member)
The texture of these waffles is just about perfect. They are crispy on the outside and tender on the inside. The batter is definitely a bit different than what I am used to, but I will make these again.

From momofone
Super delicious. Light, fluffy and crispy. I will add add l TBSP sugar and a dash of cinnamon next time, but this is a keeper!