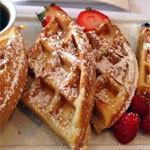 In a separate medium mixing bowl, mix together the buttermilk, egg YOLKS, melted butter and vanilla.

In a third mixing bowl (glass or metal), beat the egg WHITES with an electric mixer until stiff peaks form.

Add the wet ingredients to the dry ingredients and mix until just combined and moistened. Gently fold the egg whites into the combined mixture.

Bake according to the instructions for your waffle maker.

Light, fluffy and flavorful... the trick to a great texture is the stiffly beaten egg whites. This recipe makes about 3 standard Belgian waffles.


Comments About This Recipe
What do you think of Cinnamon Belgian Waffles?
Overall Average Rating = 4 (out of 5)
Based on 2 votes.

From wasilla
Great taste, plus they were light. Could even stand to have an extra dash of cinnamon beyond what's listed.