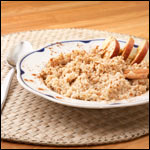 (4 servings)    Printable Version
On a cutting board, use a sharp knife to cut the apple or pear into 4 pieces. Cut out the core and throw it away. Chop each piece.

With a large spoon, put the oatmeal into 4 cereal bowls. Serve immediately with milk and brown sugar, if you like.


This can also be made in the microwave. Just reduce the liquid to 2 and 1/2 cups. Microwave the stirred ingredients on high for 3 minutes in a covered microwaveable 2-quart casserole dish. Stir and microwave 3 minutes more.

For a fun change, try using pear instead of apple in this recipe. Just a little brown sugar on top makes this oatmeal even better.


Comments About This Recipe
What do you think of Apple Snapple Oatmeal?
Overall Average Rating = 5 (out of 5)
Based on 11 votes.

From somefatchick
Had no raisins or dates. Added stevia to the juice, which I made with a cup of soy milk and 1 1/2 apple.

From Mom24Munchkins
Didn't have to cut any juice or add any sugar/milk: it was SO tasty!:) Thanks for putting this recipe out there!

From Mr Stop
This is a breakfast standard in our house. Turned the family into oatmeal eaters!

From Sally P.
Just tried it this a.m. with Craisins. I doubled the cinnamon & served it w/no added b. sugar or milk -- Great!

From tmcfadin
Great starter recipe. I cut back to 2 1/2 cups juice (other wise it was soupie) and reduced w/apples and 1/2 tsp cinammon before adding oatmeal. Also added 2 tbsp brown sugar. Really yummy.

From PhantomCooker
This is a favorite breakfast food here at our house. We add in 1/4 cup of chopped walnuts for added goodness (they add SO much flavor!)

From Tina
I don't like regular oatmeal, but by substituting the water with apple juice, this recipe is delicious! Oatmeal is so good for you and I am so glad that I found a way to enjoy it! Thank you Mr Breakfast!

From O. O. Ohhh
Delightful. Thanks for posting it.

From mirabella
I am always trying to get my family to eat oatmeal, and this recipe worked, they loved it! It reminds me of an apple pie.

From Charlyn
Made almost as directed. I'd never just used a juice for the liquid before so I used half juice and half milk. Next time, I'll try all juice, because it adds a whole lot of flavor to the oats. Also... I love these old cookbook recipes. Please do more!