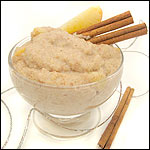 (2 servings)    Printable Version
In an 8-cup microwavable container, combine all ingredients except cinnamon and sugar.

Microwave on high, uncovered, for 4 minutes, stirring at the end of each minute, or until thick and creamy.

Let stand 1 minute, then sprinkle with cinnamon and sugar.

This is a quick and easy microwave recipe for a super flavorful oatmeal. Try substituting apple juice in place of the water for more intense apple flavor.


Comments About This Recipe
What do you think of Cinnamon Apple Raisin Oatmeal?
Overall Average Rating = 5 (out of 5)
Based on 3 votes.

From Liz
Great oatmeal. A little word of caution.... don't mix milk and apple juice! Sub the juice for the milk. I made the mistake of using the juice and milk and ended up with curds. :)

From Falconsong
Delicious and easy to make! I cooked in a pot until it thickened up, not the microwave since I hate microwaving things. It turned out beautifully. Thank you!

From Lliz 26
This oatmeal was I think the best I had ever tried! Nice job!!!