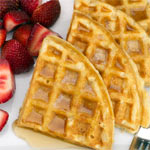 (6 servings)    Printable Version
Over the years, a few people have submitted recipes with the words "best" or "greatest" in the title. I usually remove those words so the recipe name is more descriptive and less self-glorifying. In the case of these waffles, I'm enthusiastically keeping the the adjective because these really are THE BEST peanut butter waffles I've ever had. I made the recipe exactly as submitted and I couldn't have been more happy with the results. (This recipe was submitted in 2008. It was tested and photographed and August 2014.) 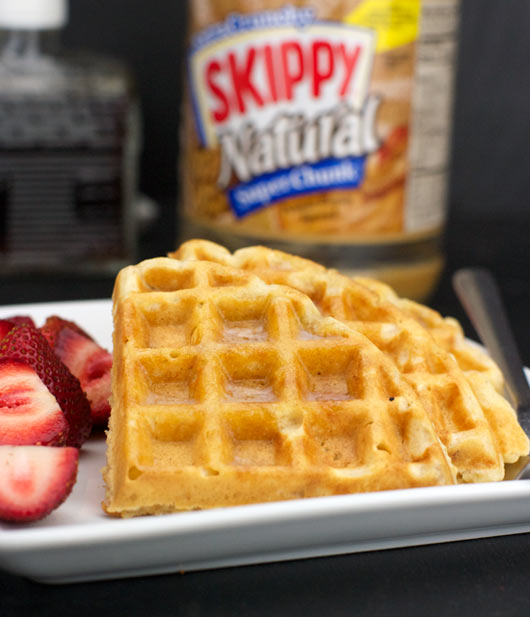 How To Make The Best Peanut Butter Waffles

This recipe makes six 6 and 1/2-inch round regular (non-Belgian) waffles.

Preheat a waffle iron to medium-high heat. Mix the flour, baking powder and salt in a bowl. In a separate bowl, mix the peanut butter, sugar, eggs, milk and oil. Add this to the flour mixture.

Spray the waffle iron surface lightly with the cooking spray or brush it with the butter. Fill a medium-size ladle (or 1/2 cup) with batter and pour it onto the waffle iron. Cook until the waffle is golden brown, approximately 2 minutes.

Serve hot with maple syrup and butter or jam and fresh berries. 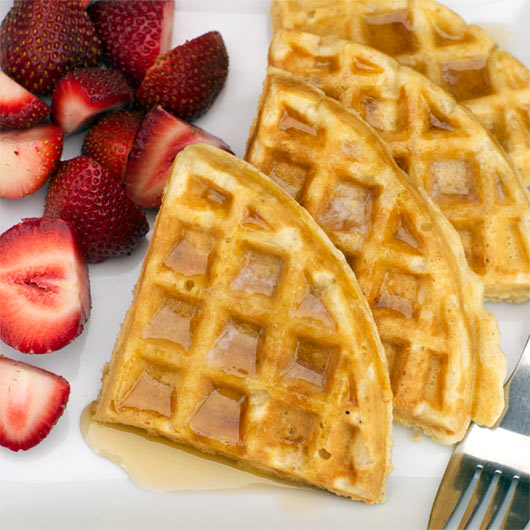 My kids love these with strawberry preserves, which of course, turns the recipe into peanut butter and jelly waffles in their minds. I prefer softened butter and pure maple syrup as my topping.

Mr Breakfast would like to thank MichiganDan for this recipe.


Comments About This Recipe
What do you think of Best Peanut Butter Waffles?
Overall Average Rating = 4 (out of 5)
Based on 10 votes.

From wendt
Peanut butter is my favorite food and these waffles were amazing!

From meme
It's pretty good ! I added pecans because I only had smooth PB. Add cinnamon. It really ties things together.

From troop27
I used low-fat milk and omitted the sugar (since the peanut butter is sweet). It was still delicious. Crunchy peanut butter was a good idea because you get a little crunch in every bite which is very nice.

From golly
Really liked them as did my kids. Had them with jam on top so they were peanut butter and jelly waffles. Very good.

From You S. Aye
You have to use crunchy peanut butter. It give the waffle a little crunch that's fun and tasty.

From Nghisus
They were really good, but I used smooth PB and not chunky PB so it wasn't a very pronounced PB taste, so probably using chunky PB next time. I halved the recipe because it does make a lot if you're using the one listed, my iron made 5-6 waffles with a half recipe.

From idara (Team Breakfast Member)
Made mine with smooth peanut butter. I really liked them. This recipe makes a lot!

I made these waffles exactly as the recipe said, and it was delicious. Very peanut butter-y.

From lpiner (Team Breakfast Member)
My kids loved these waffles, I changed the recipe to 2 cups milk and 1/4c heavy cream and I added 1/4c. of melted butter instead of the oil. I increased the sugar to 3tsp. thanks for the recipe!