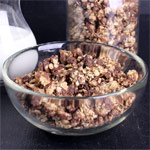 (6 servings)    Printable Version
This recipe was originally submitted with the name "Healthy n' Happy Granola". Since it's a smaller batch of granola, I decided to make it in the toaster oven. And since it worked pretty well, I decided to change the recipe's name to Toaster Oven Granola. You should be aware that this is a very basic granola. You might want to add a teaspoon of vanilla and a dash of cinnamon to spark it up a little. When I realized that it was kind of plain, I decided to add some chocolate chips. That made it very, very good as chocolate often does to everything. Bottom Line: If you're dead set on using the toaster oven, this is pretty good stuff. If you want to use your regular oven, there's a number of better, more interesting recipes in our Homemade Cereals section. (This recipe was submitted in 2008. It was tested and photographed in June 2016.) 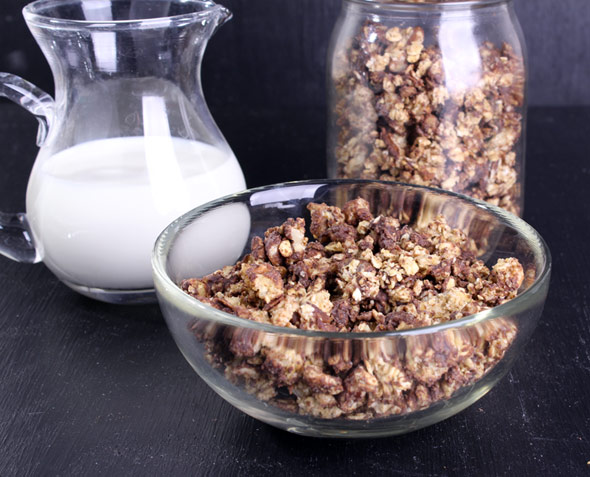 How To Make Granola In The Toaster Oven

Yield: a little under 3 cups.

Mix oats and all nuts together in a medium bowl. Drizzle honey and canola oil over the top and mix until everything is lightly moistened.

Spread mixture out on foil-lined baking sheet (for easy cleanup) and flatten to an even layer.

Bake in the toaster oven at 300 degrees for 15 to 20 minutes - stirring every 8 minutes - until you can smell the honey and oats and the cereal is beginning to turn golden.

Remove from toaster oven and immediately add raisins and mini chocolate chips, if desired. Toss until chocolate is melted and most oats are coated.

Stores well in an airtight container for up to 2 weeks. 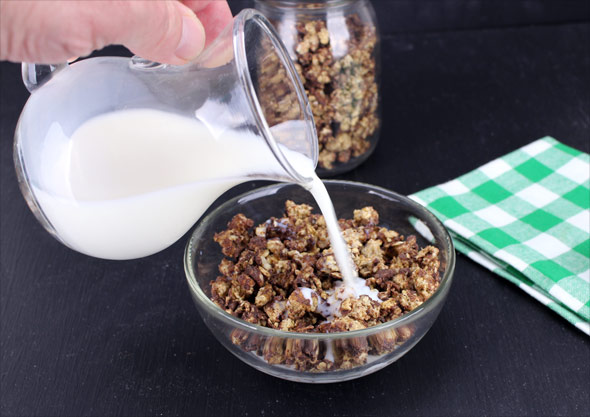 To test for doneness, I take 1 teaspoon of the granola out of the toaster oven after 15 minutes. Blow on it and let it cool for 30 seconds. Taste and you can get an idea if the granola will be crisp or if it needs to bake longer. 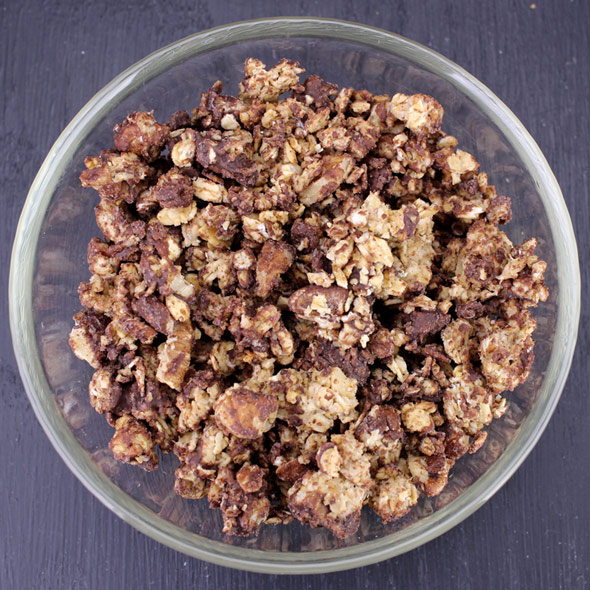 A basic granola that you make in the toaster oven. Includes directions to make a chocolate-coated variation.

Mr Breakfast would like to thank Nashta for this recipe.


Comments About This Recipe
What do you think of Toaster Oven Granola?
Overall Average Rating = 4 (out of 5)
Based on 2 votes.

From moonen
I loved this. I added vanilla extract and cinnamon before baking.

From T1namar1e
This granola was Okay, but it was kind of bland.