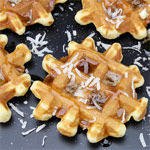 (6 servings)    Printable Version
I was very happy with these waffles. They came out crisp and light. They're not very sweet and the coconut flavor is pretty subtle, but they come to life when you add butter and maple syrup. I froze a couple to have later in the week. I toasted them in the toaster oven for about 4 minutes. They were every bit as good days later as they were when they came out of the waffle maker. If anything, they were even more crisped. Bottom Line: These are great waffles that I'm anxious to make again. (This recipe was submitted in 2002. It was tested and photographed in June 2016.) 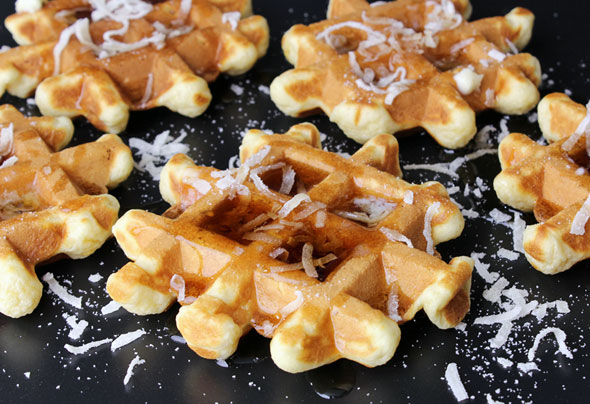 How To Make Belgian Coconut Waffles

In a medium bowl, beat the egg whites until stiff. Make a hole in the center of the dry ingredients. Pour the liquid mixture into the hole and mix well. Gently fold the whites into the batter. Bake in the waffle iron until golden brown. 5 to 7 minutes.

Note From Recipe Submitter: If desired, you could replace the egg yolks in this recipe with 1/2 cup of egg substitute. 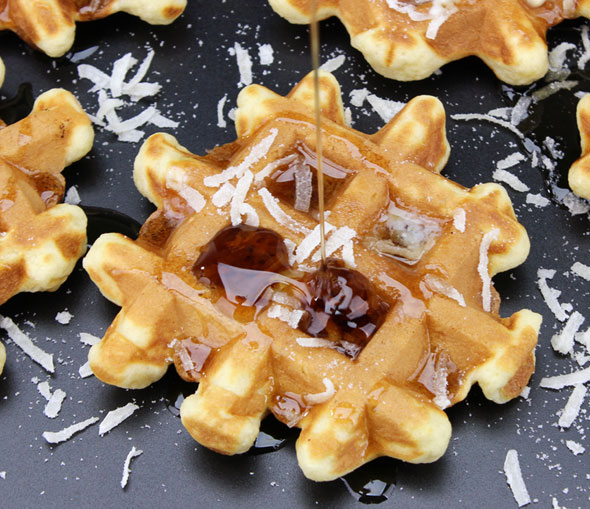 I made the waffles exactly as instructed with one exception. Instead of honey and maple syrup, I used 1 Tablespoon each of white sugar and brown sugar. I also splashed a little more milk (maybe 2 Tablespoons) into the completed batter to get the exact consistency I wanted.

I made my waffles rustic and rough by dolloping about 1/4 cup batter in the middle of each square waffle maker plate. I did not use any cooking spray or grease and I had absolutely no problem with the waffles sticking to the waffle maker. 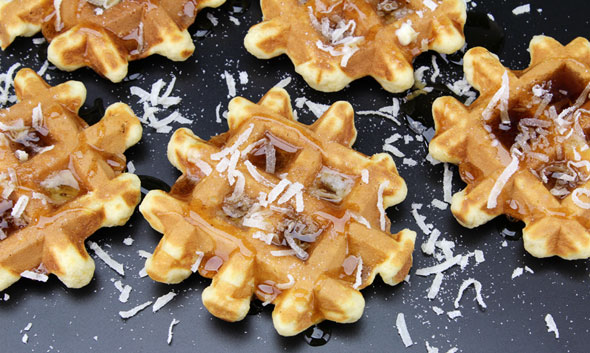 
Comments About This Recipe
What do you think of Belgian Coconut Waffles?
Overall Average Rating = 5 (out of 5)
Based on 5 votes.

If squishy and floppy... I bet waffle maker wasn't hot enough and they needed to cook a little longer.

Wow this looks delicious! I can't wait to try it out! I have my personal favorite though, check it out 101lowcarbmeals.com/waffles-recipe

From mdw
I made a few changes: I used sweetened angel flakes coconut, so I omitted the honey. Also, I used bleached flour, only 5 egg whites plus a whole egg and omitted the egg-substitute.

These waffles are not too sweet and came out VERY crispy!!! We got 8 servings (the batter went nuts once it hit the waffle iron!) Spread them with Nutella... YUM!

From ann
These came out very floppy and squishy, not crisp and light. I wonder if it is because there was no butter or sugar in the recipe.

From Belgian
Tasty and healthy!!