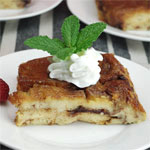 (8 servings)    Printable Version
I used chocolate chips instead of raisins in this recipe. I'd recommend that you try that too. Having a layer of melted chocolate turns a regular baked French toast into something unique and fun. Make sure you use a bread with lots of cinnamon flavor. As with every French toast recipe, day old (slightly dry) bread works best. The only change I'd suggest is that you start by thoroughly greasing your baking pan with additional butter. I loved everything about this breakfast except that it stuck to the sides of the baking dish and was hard to clean. I found that leftovers heated up the next day were also very, very good. (This recipe was submitted in 2007. It was tested and photographed in March 2014.) 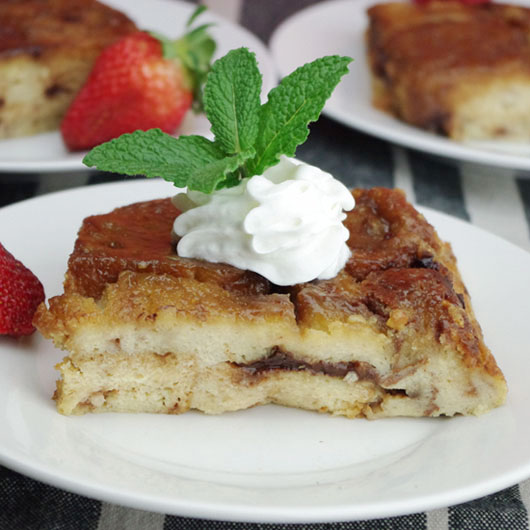 In microwave, melt butter with brown sugar. Use to coat bottom of 13-by-9-inch pan. Place 1 layer of bread in pan, packing in tightly. Scatter raisins or chocolate chips evenly over bread. (Or sprinkle 1/4 cup raisins on one side, 1/4 cup chocolate chips on the other, to accommodate different tastes.) Top with second layer of bread. Whisk together remaining ingredients and pour evenly over bread. Cover with foil and refrigerate overnight.

Preheat oven to 350 degrees. Bake, covered, in preheated oven 45 minutes; uncover and bake another 15 minutes. Dish will puff up and then fall. Cut into squares, invert onto serving plates and serve, if desired, with whipped cream. 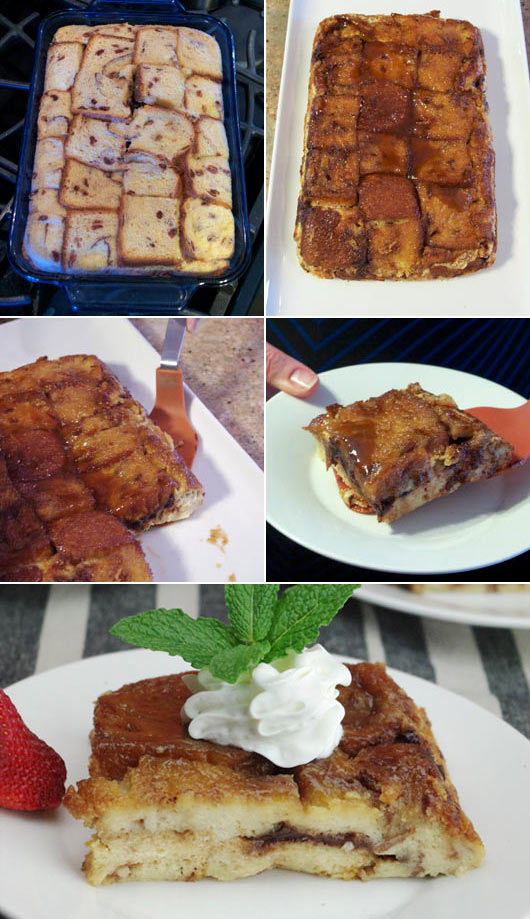 This over-night recipe is perfect for an impressive brunch. A layer of melted chocolate makes it especially special.


Comments About This Recipe
What do you think of Baked Cinnamon French Toast?
Overall Average Rating = 5 (out of 5)
Based on 3 votes.

From NurseMichelle
I served this for xmas morning and the family LOVED it. Would not stop raving about how delicious it was. This is a keeper! It will always appear on the xmas morning table.

From rrdavis (Team Breakfast Member)
I used a raisins nut bread to do this recipe and extra raisins and my husband said it was the best breakfast ever! I'll do this recipe over and over again!

From Hooray
Yay 4 this French toast!!!