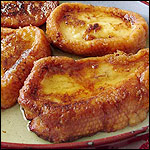 (2 servings)    Printable Version
In a large bowl, beat the eggs with the milk and vanilla.

Pour just enough oil in a large frying pan or skillet to cover the bottom completely. Set the pan to medium-high heat. (To test if the pan is hot enough, drip a drop of the egg mixture in the pan. If you can see it start to cook after a few seconds, the pan is ready).

Place each slice of bread in the egg mixture and flip it over so it's completely coated. The bread should be soggy but still firm enough to handle.

Transfer the bread slices to the frying pan.

Remove bread from the pan and transfer to serving plates.

Sprinkle each piece with cinnamon and sugar. Drizzle honey over the top and serve warm.

This dish is also known as Spanish Bread Pudding. It's eaten all year long in Spain, but it's especially popular during Lent. It might make a good Easter breakfast if you're looking for a new tradition.

Mr Breakfast would like to thank kidpancake for this recipe.


Comments About This Recipe
What do you think of Torrijas (Spanish French Toast)?
Overall Average Rating = 5 (out of 5)
Based on 3 votes.

They are not Spanish French Toast. Torrijas is the original recipe. It's origins can be found in the monasteries of the north of Spain during the middle ages.

From slimby
This recipe changed my life!

It depends on where you are from - whether it is called torreja or torrija.

My mother used to make this. It is a good recipe. But it is called Torrejas not Torrijas, just by the way.

From GildaNV
It was awesome!

Exactly. And they have to be soaked in the milk (with the lemon that Muddybox said above) and, then, coat them in eggs.

From Muddybox
For torrijas to be authentic they need to be fried in olive oil and the vanilla extract to be replaced with grated lemon rind.