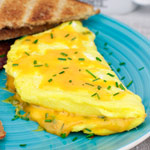 (2 servings)    Printable Version
When I tested this recipe, I cut all the ingredients in half to make a single serving. It worked great. There's nothing too fancy about this one. It's basically just a good, reliable Cheddar cheese omelette with green onion (I used chives). I did like how the dash of Worcestershire sauce gave it a hint of unique flavor. If you're looking for a basic omelette recipe that tastes great, you'll probably like this one. (Recipe submitted in 2007. It was tested and photographed in November 2013.) 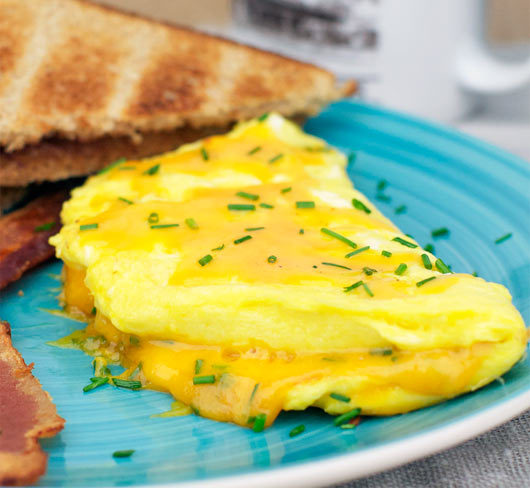 How to Make A Country Omelette

In a large mixing bowl, beat the eggs until slightly frothy. Stir in the milk, Worcestershire sauce and salt and pepper.

In a large skillet over medium-low heat, melt the butter. Pour in the egg mixture. As the egg sets, lift the edges of the omelette and tilt the pan slightly to allow uncooked egg to reach the pan's surface.

When egg is nearly completely set, cover the pan and cook two more minutes until the surface looks dry. Top one half of the omelette with the cheese and chopped green onion. Fold in half.

This a very nice Cheddar Onion Omelette... so good with whole wheat toast and hashed browns.


Comments About This Recipe
What do you think of Country Omelette?
Overall Average Rating = 5 (out of 5)
Based on 7 votes.

From Animegurl
I made this. Next time, I'll add things like mushrooms and bell peppers. I'll also skip the Worcestershire sauce.

From Awesome K.
I liked the these of Worcestershire sauce in the eggs but I thought there was just a little too much because it gives the eggs a dark tint. I'll only do 2 Tablespoons next time around.

From brooke a.m.
Easy to do, tastes delicious!

From atari
I added steak to mine and it was really good!!

I am doing a project in math about omelettes and I think I might choose this one! =)

From bloom_17 (Team Breakfast Member)
This omelet was the best omelet that I have ever had in my whole entire life.