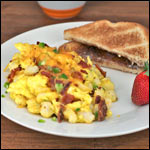 (6 servings)    Printable Version
Cook the bacon in a frying pan until crisp. Remove bacon and drain all but 2 Tb of bacon grease.

Drain the can of hominy and add to the bacon drippings. Fry over medium heat until hominy is lightly brown.

Beat together the eggs, salt and pepper. Add to hominy and cook, stirring frequently, until eggs are done.

Crumble bacon over the top and serve.

Try shredded cheese melted over the top too, if you want to. 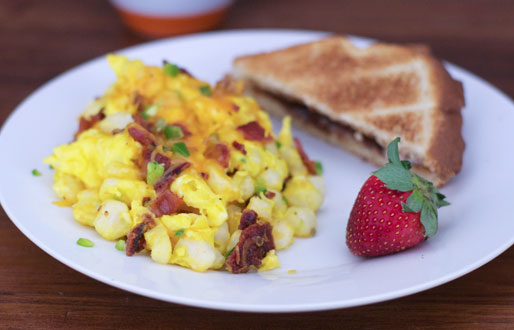 Note From Mr Breakfast:
I tried this scramble and I liked it quite a bit. It was very hearty and filling. The hominy adds a unique corn flavor that works well with the bacon and Cheddar.

I changed the recipe just a little bit so it would make just two servings. I used 4 slices of bacon, half of a 15 ounce can of hominy and just 3 eggs.

The reduced amount of bacon didn't produce enough grease to fry the hominy in, so I added about 1/2 Tablespoon butter. The hominy never really browned but it was cooked through and delicious after 5 minutes. I also added just a teaspoon of chopped jalapeno in with the hominy to boost the flavor. 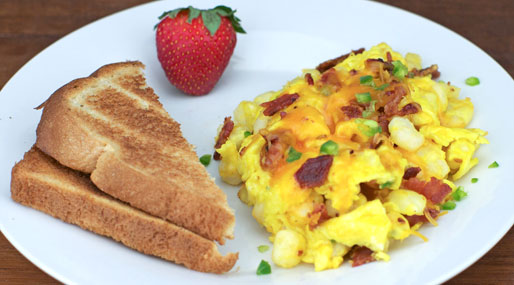 Hominy is an under-used ingredient that goes great in scrambles. It adds a real fresh and hearty corn flavor.

Mr Breakfast would like to thank scrambler for this recipe.


Comments About This Recipe
What do you think of Bacon and Hominy Scramble?
Overall Average Rating = 4 (out of 5)
Based on 6 votes.

From Lolo
I added chopped mushrooms to fry with hominy. Also a couple of spoons of ricotta cheese and a little bit of heavy cream - little red crushed chili (just a wee bit) - Good stuff!

From ChattaHonkey
Way too much corn flavor. I get the idea and it was good at first but it became a bit much as we kept eating. I recommend 10 ounces of Hominy and 3 tb of bacon grease. Also the comment about adding the salt after you cook the eggs was on point.

From dgorky51 (Team Breakfast Member)
What a great recipe, I was wondering what to do with some leftover hominy. I added some diced fresh jalapenos (or canned green chilies would be good also).

Just a quick note: It's actually not a very good idea to add salt into the eggs prior to being cooked as this often makes the eggs tougher and less fluffy. Add salt after cooking!

From Patsy Poo
Tasted okay but didn't go over that well in my house. Is there anything I can do to tenderize the hominy? I would try mashing it if I did this again.

Can you make it without eggs, my sister used them all up =(

From TomShandruk (Team Breakfast Member)
I... Love... This. I'm 14, and I just finished cooking this stuff, and it is great! I love eggs, bacon, and most of all hominy, so this recipe is like heaven to me! I'm going to go back to eating it all now :D