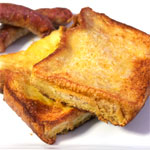 (12 servings)    Printable Version
This overnight French toast is good. The bottom is indulgently sweet thanks to a layer of butter and brown sugar. The rest of the bread turns out similar to French toast cooked on a griddle. While I thoroughly enjoyed this recipe, I have to point out that there’s another recipe on this site that is similar but quite a bit better. Check out Overnight Caramel French Toast and consider making that instead. With that said, I enjoyed this Slumber Party French Toast and would give it a B+. (The recipe on this page was submitted in 2006. It was tested and photographed in September 2014.) 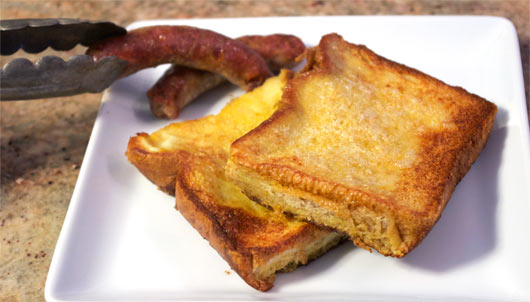 Spread butter (or margarine) in the bottom of a 13x9 inch glass baking dish. Place brown sugar in a bowl. Stir in cinnamon until blended. Sprinkle mixture evenly over melted margarine in the baking dish. Combine eggs and milk. Mix with a fork until well blended. With clean fingers or a fork, dip bread slices into egg mixture to coat both sides.

Remove pan from the refrigerator 1 hour before baking. Let stand on the counter to reach room temperature. Preheat oven to temperature 375 degrees F. Carefully place pan in the oven and cook for 25 minutes. Using oven mitts, remove pan from the oven. Carefully remove foil from the pan. Return pan to the hot oven and cook for 15 more minutes. Using oven mitts, remove pan to cooling rack.

Note From Recipe Submitter: Use crusty French bread if possible. Regular bread will not work as well because it's softer and might get soggy overnight.

For the Slumber Party French Toast pictured here, I broiled the dish for 2 minutes after baking so that the top would be nicely browned. I also increased the number of eggs to 3, because I like to taste the egg in my French toast dishes. I added 2 teaspoons of vanilla to the egg and milk mixture for a little extra flavor. 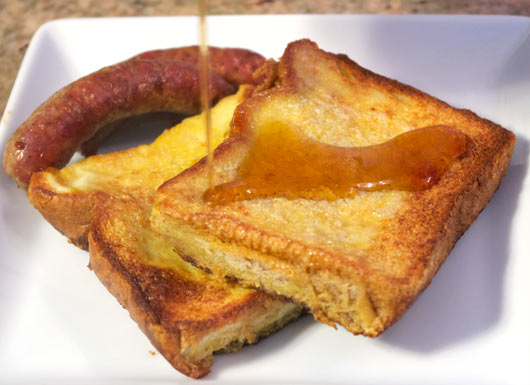 Make this the night before a sleep-over, and spare the stress of breakfast in the morning!

Mr Breakfast would like to thank DragonBear for this recipe.


Comments About This Recipe
What do you think of Slumber Party French Toast?
Overall Average Rating = 5 (out of 5)
Based on 4 votes.

From Hatcher (Team Breakfast Member)
Quick and easy to make. The next morning all you have to do is put it in oven. Its great if you make homemade syrup.