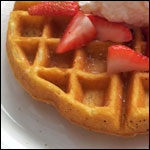 In a large bowl, sift together the flour, baking powder, cinnamon and salt.

In a seperate bowl, beat the egg yolks. Add milk and mix well.

Bake in heated, greased waffle iron according to manufacturer's directions.

Serve with maple syrup or other favorite topping.

This is our family's basic waffle recipe. It's a reliable batter with honey instead of sugar.

Mr Breakfast would like to thank casey for this recipe.


Comments About This Recipe
What do you think of Honey Waffles?
Overall Average Rating = 4 (out of 5)
Based on 15 votes.

From Eric-3
I wanted to make these, as I can't have any refined sugar. Big Mistake. I've had a lot of waffles in my lifetime, and these were some of the worst. They were bland and even when fully cooked, stuck to the roof of your mouth. Will not be trying again.

From G.Ma Becky
Very good! Directions about when to add the honey were missing, so I heated it and added it to the butter.

From Kevin
I made these exactly as written, the first time. It's kind of funny how a recipe that's fairly picky about the order of things forgets to mention when to add the main ingredient in the name (honey). I put it in when adding the egg whites. Not sure it all makes any difference. The waffles came out somewhat dark, compared to other recipes on my waffle iron. They have a slight cinnamon taste - kind of new to me. Not all that fluffy, though. They were okay, I guess - I won't go so far as to rate them "very good". I've made them again, with the same ingredients but without the complicated steps (i.e., all in one bowl), and didn't see any difference.

From grassyhillz13 (Team Breakfast Member)
Thought they was pretty good. Just basic waffles with a light hint of honey flavor (barely noticeable). Next time, I'd add a little vanilla and a dash of nutmeg for just a little bit more flavor. But overall, we were all happy with these.

From Good Buddy
Thick when mixing but very tasty.

From V. Price
Pretty good. Add a little vanilla too. Not as good as the recipe called Best Waffle Ever on this site. That one is the best so far.

From scammer
I agree with previous comment. If you add the honey with the egg yolks, the waffles turn out fine. This is a good recipe, not a great one.

From mott
They don't really look like on the picture.

More darker, almost brown. & not that fluffy. Half of fluffiness compared to the picture.

BTW, I dont get it, why cant i just mix all up & start baking?

From empheliath (Team Breakfast Member)
I love these waffles! They come out a little more cakey than other waffles I've tried, from the very thick batter. And the cinnamon is just enough of a different flavor to make them really stand out. Yum!

From Cupps
This recipe has one minor flaw... there is no instruction as to when the honey is to be added to the mix. I found that it goes in nicely with the egg yolks, it allows you to blend the honey so it goes in smoothe:)

When is the honey supposed to go in? and is it there any alternative to butter?

From O.G.
This is the best waffle I have ever tasted! The only problem I had was that it was a little to big!!

From A-P-Real
Mmmm...delicious! I added chocolate chips. And put the honey in with the melted butter. A tad bit salty.

From bobs
These are great. I put the honey in the butter after melting otherwise got too sticky in the cold milk and eggs.

From MGaray83
When do you add the honey to the mixture?

Where do I get free honey?