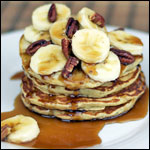 (4 servings)    Printable Version
This recipe was sent to me by "newjerseygal" a while back. I finally got around to trying it (November 2012). It wasn't until I took these pictures that I realized I had used chopped pecans instead of walnuts. I can tell you this... these pancakes are great with pecans and I have to assume they'd be just as good with walnuts. 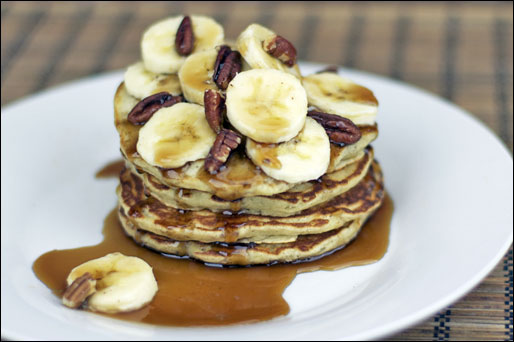 How To Make Banana Walnut Pancakes

In a large bowl, sift together flour, sugar, baking powder and salt.

In a seperate medium bowl, mix together buttermilk, egg, cooking oil and vanilla.

Stir in banana until just mixed. Fold in walnuts.

Turn the pancake when the visible side starts to show a lot of bubbles. Turn and cook other side until golden brown.

Serve with butter and syrup, or any other favorite topping. 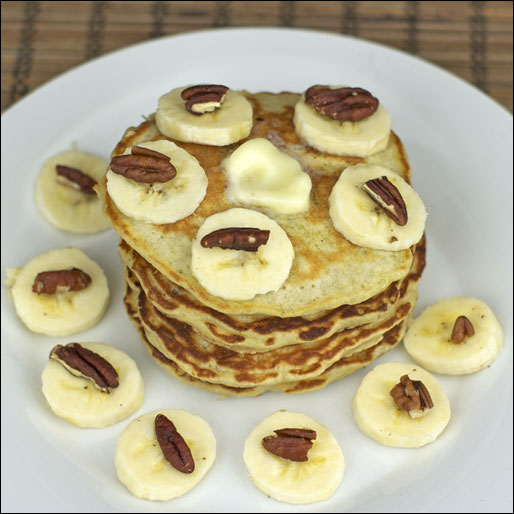 We love these reliable pancakes topped with fresh banana slices and a dollop of whipped cream. Mmmmmm. Delicious. I may go make some right now.


Comments About This Recipe
What do you think of Banana Walnut Pancakes?
Overall Average Rating = 5 (out of 5)
Based on 8 votes.

From Omit Sugar
I would recommend omitting sugar from recipe. You're putting syrup on them, so why the added sugar?

From shine0854
I used half & half with a shot of vinegar instead of buttermilk, also coconut oil and whole wheat flour... yummy!

From William M.
They're good but a little bit heavy (which isn't necessarily a bad thing). Try whipping the buttermilk together with the banana in a blender to save some time.

From Daphne
I made these today as a brunch and served them with sliced banana, chocolate syrup, butter, and whipped cream! Decadent! Super-easy to make.

We loved them. I used pecans instead of walnuts.

From Readaloud
Wonderful! I served them with a cinnamon maple syrup.

From Kimmels
Not too sweet and just the right combination of walnut and banana - loved these! They weren't the fluffiest pancakes but they had a really nice light texture.

My fiance made this one. Fantastic.