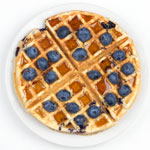 (6 servings)    Printable Version
After testing several blueberry waffle recipes and getting disappointing results, I decided to develop a signature recipe. These waffles turn out light and fluffy every time. If you fold the berries in carefully, they won't discolor the batter as some recipes tend to do. Plus, you're guaranteed a beautiful burst of blueberry in every bite. A hint of cinnamon and vanilla complement the flavor of the berries and add some life to the batter. For crisper waffles, brush the plates of your waffle iron with melted butter before dolloping on the batter. (This recipe began testing in 2005. It was perfected and photographed in August 2014.) 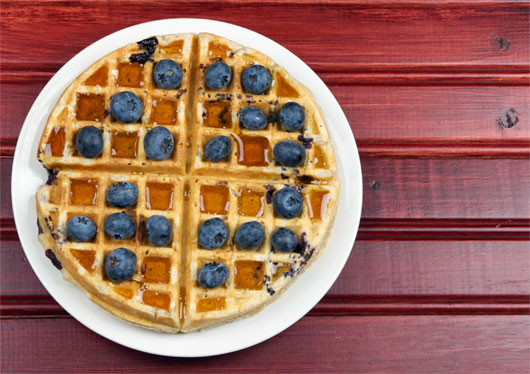 How to Make Better Blueberry Waffles

In a medium-sized bowl, beat the egg yolks and milk together. Stir in the vanilla.

In a larger bowl, sift the flour and stir in the baking powder, sugar, salt and cinnamon. Add the yolk and milk mixture and whisk until smooth. Stir in the melted butter.

Gently fold the blueberries into the batter 1/3 cup at a time.

Cook in a well-greased waffle iron heated to its medium-high setting. 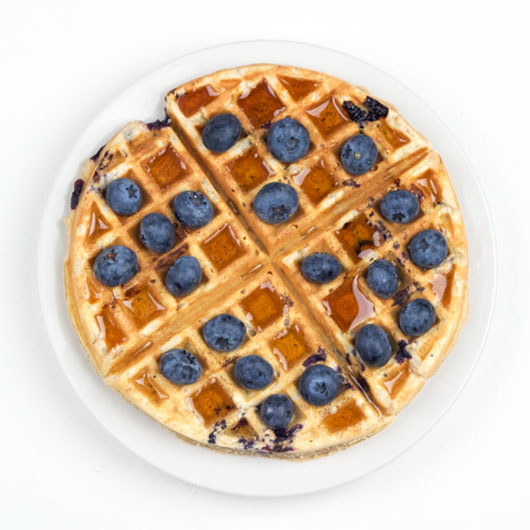 This recipe made six 6-inch round waffles in a regular (non-Belgian) waffle maker. For my waffle iron, I used 1/2 cup of batter per waffle.

A good reliable blueberry batter. These waffles are great with a thin spread of butter topped with a few fresh berries and a dollop of whipped cream. Great with maple syrup too.


Comments About This Recipe
What do you think of Better Blueberry Waffles?
Overall Average Rating = 4 (out of 5)
Based on 17 votes.

From BatCat213
Just made them! Really good batter seemed thick but tasted great! Will make again!

From ladygwyn
Very tasty but needed way more milk... like 2 cups worth of milk for the amount of flour I used. I used a mix of whole wheat, AP and buckwheat flour to make the 2 cups of flour needed.

You can also try this recipe for making pancakes. Turned out awesome for us (with no adding baking powder).

They have not disappointed us! Fluffy, not sticking to the surface, delicious! I would recommend you add 1.5 cup of flour instead of 2 cups as it is recommended is recipe, though.

From K. Baxter
It was delicious with fresh blueberries. I'd make this recipe again.

From coolkid
Almost too buttery. I'd drop that back to one quarter cup next time. Good flavor though.

From itsonlyme
This recipe was a little too oily. The waffles came out super smooth... almost glossy and the texture was just, well, off. I didn't enjoy them and will look for another recipe next Sunday.

From Tasty Spice
Also great with cinnamon and vanilla added to the batter : )

From Catty
Loved the recipe - makes such like and fluffy waffles. They freeze very well too. I just reheat in the toaster.

From Cory K.
Very good flavor and light, fluffy texture. Taking the time to beat the egg whites is a must. Topped it with blueberry syrup from Smuckers. Highly recommended.

From karaboo
Also makes delicious pancakes! I would definately recommend these to anyone.

From copydiva
It was the most WONDERFUL thing i have ever had!!!

From ferrari
did not like it batter came out dry.

From idara (Team Breakfast Member)
YUM! I received a wafflemaker as a Christmas gift, and I was searching for good recipes to use with it. This one is definitely a keeper! Thanks!

From Fluffy Lover
I love how fluffy they are!

From Lisa
Very nice. We topped them off with cream and extra berries. I'll agree with TrevGregory. This is a very helpful cooking site. Many Thanks. Lisa

From TrevGregory (Team Breakfast Member)
Absolutely amazing. This was our 1st attempt at waffle making...they're not bog over the pond here in the UK...but with an abundance of uur homegrown blueberrys we had to use them so how - and pleased we stumbed acorss this amaxing website. THANKS

From :-)
Tasted good but barely any sweet flavor

From matt3
Turned out great... lots of flavor. Thanks.