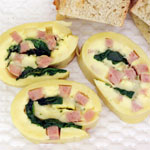 (4 servings)    Printable Version
This kind of omelet is fun and a nice change from the regular fold-and-serve types. You bake a layer of eggs with some mix-ins. Then, you top the eggs with your fillings. Instead of folding, you roll. Watch the cooking time here. My omelet roll took about 25 minutes for the egg to fully set. I'd recommend reducing the flour to 1/3 cup. At a full 1/2 cup, the omelet is more spongy than I think most people would like. Instead of using exact amounts for the cheese and spinach, it's probably best to eyeball it - making one even layer of each on top of the baked eggs. (This recipe was submitted in 2005. It was tested and photographed in January 2014.) 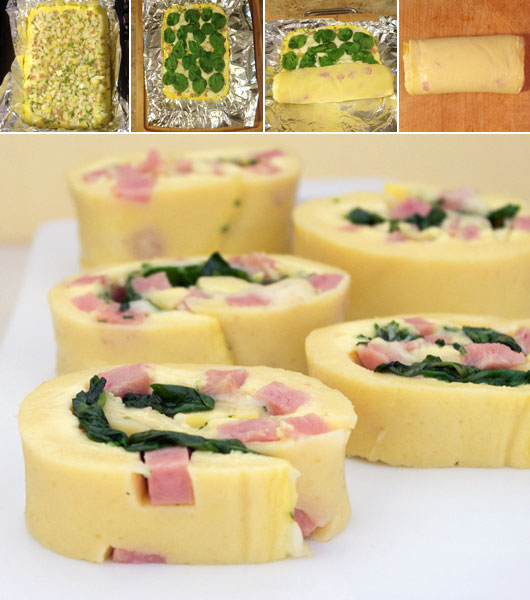 How To Make A Ham And Swiss Omelet Roll

Line a 15 inch x 10 inch pan (must be at least an inch deep) with aluminum foil. Generously coat with nonstick spray.

In a medium bowl, beat together flour, milk, butter, egg and salt (if desired) until well blended. Pour mixture into the pan. Sprinkle with ham and onion.

Bake for 15 minutes until eggs are set. Immediately sprinkle evenly with cheese and spinach.

Once the cheese has melted, roll the omelet up. Start at the narrowest end. Use the foil to lift and roll. Cut into slices and serve. 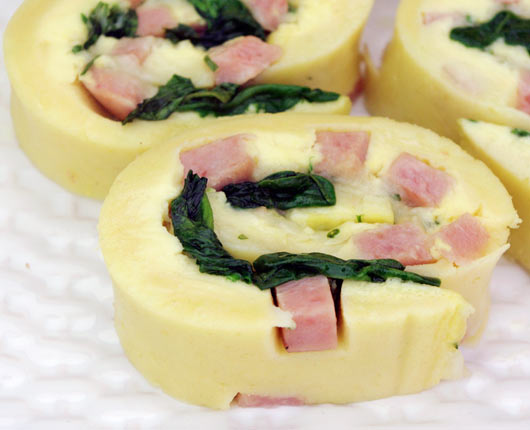 I made a lot of substitutions and changes when I made the omelet roll you see here. I don't have a 15 x 10 inch pan so I used a 12 x 8 pan. I think the wider, longer pan would have worked better so the omelet would be thinner and roll into more layers. That's not ham in the pictures. It's Spam. The only spinach I had in the house was in a spring mix salad bag. I was able to pluck out just enough spinach leaves to make one even layer over the eggs. I used a combination of Swiss and Provolone cheese. Instead of chopped onion, I used a 2 Tablespoon combination of chopped chives and parsley. Other than that, I followed the recipe exactly.

This rolled omelet features ham, Swiss cheese, spinach and onion. Lots of cheese is what makes it cheesy.


Comments About This Recipe
What do you think of Ham And Swiss Omelet Roll?
Overall Average Rating = 5 (out of 5)
Based on 2 votes.

From SueKath
Great recipe! You can make it ahead of time and reheat. I have made several for brunches and wow! Nothing ever left over!

From Mama
MMM! This recipe was so good, I ended up putting it in the cook book passed down from generation to generation in my family!