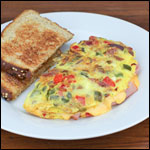 (2 servings)    Printable Version
What is a Denver omelet? Almost everyone agrees that it should have chopped onion and chopped bell pepper cooked into the egg (preferably a combination of red and green bell pepper). Most people would expect small cubes of ham in there too. Whether or not it should have cheese as a filling or a topping is up for debate. The recipe submitted here is sort of a Meat Lover's Denver Omelet. It includes crispy, crumbled bacon with the ham and vegetables. For more of a purist's Denver Omelet, just skip the bacon. 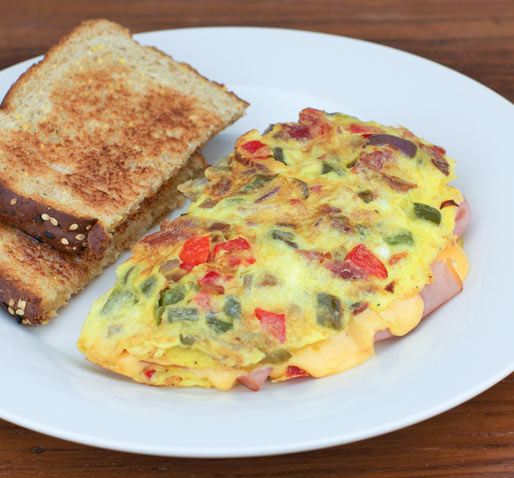 How to Make A Denver Omelet

Melt butter in a large skillet or on a griddle.

Saute onion, bell pepper, ham and bacon in the butter until the onion starts to become translucent.

In a small bowl, whip the eggs lightly. Add salt and pepper and hot sauce if desired.

Slowly, stir the eggs into mixture in skillet. Lightly brown on one side. Turn over and lightly brown other side.


Alternative Version For One Omelet

The Denver Omelet recipe above works great and has received some very good reviews. When I made it, I switch up the ingredients just slightly based on what I had around. Instead of using chopped ham, I filled the omelet with very thinly sliced deli ham and 1 slice of American cheese. 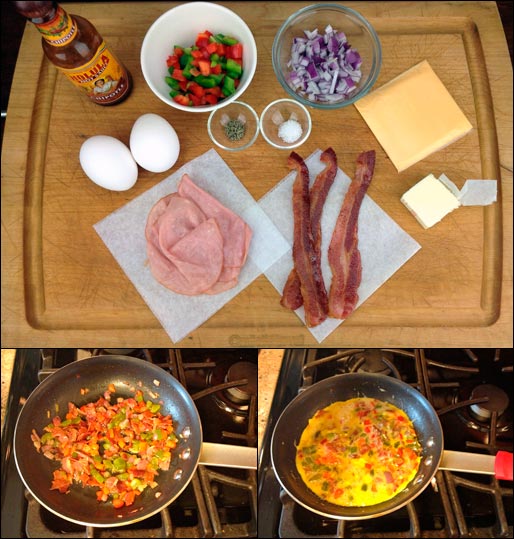 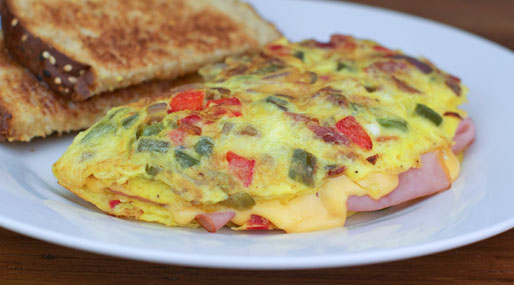 You can omit the bacon for a more traditional Denver Omelet... but I like mine kinda meaty (sometimes I even add a slice of American cheese).

Mr Breakfast would like to thank ILoveBagels for this recipe.


Comments About This Recipe
What do you think of Denver Omelet?
Overall Average Rating = 5 (out of 5)
Based on 41 votes.

I agree with Lily... it's a folded frittata. Set the eggs first and add the fillings.

From D. Dailey
Any restaurant menu... you will see diced ham and green bell pepper, that's what make it a Denver. Point blank. Onions need to be in there but it's the ham and bell pepper that go so well together.

From Nette
I actually think this is the best omelet I have seen in a while. I would add mushrooms to mine though and cheese on the top! Delicious. P.S. People can be so negative sometimes... go make your own omelet if you don't like this one! It looks good to me!

This omelet is a western omelet. The Denver omelet has mushrooms added to it!

From J. Las Casitas
What this Omelet has or what it doesn't have, any way you make it, traditional or personalized, it's a good warm belly filler that will make it easier to get to the Lunch (truck or sit down). Just enjoy it either way you make it, Cheesy, Meaty, Eggie, and or Hot Sauce, or Salsa, Sour Cream... It's even great with just Salt and Pepper. "Just Enjoy" - Las Casitas #91-John

I think she meant 3 slices. Probably just a typo.

From Mwjakel
Made this with what was in the fridge. Didn't have ham so I used a few breakfast sausage links. Also, used pico de gallo instead of the usual ingredients. The smoked chipotle tobacco sauce made it that much better.

Lovely recipe, but it's not an omelette unless you fill it and fold it. This is a frittata because it doesn't tell you to fold it. I suggest you put the cheese inside, fold it and let the cheese melt.

From Phil H.
Liked it a lot... skipped the ham because I didn't have any, but did everything else. Lots of flavor.

From Xizzi
I have one every morning, however I substitute the eggs with egg beaters as it is is much healthier and lo cal - I skip the bacon (yuk), but add diced ham, onion, tomato, green pepper - awesome.

From C.S. Reid
I love a good Denver omelet and this came out perfect.

A true Denver omelet does NOT have cheese. If it did, it would be a Western omelet.

From Wonder Cook
Really good idea for my kids (or maybe just me) for when they're home from a sleep over.

From B. W. Kaye
Great, but I don't do the bacon and I add some sour cream at the end. Delicious!

From casey
@JB - It's because he was making a smaller portioned meal.

From Zack BG
I'd use better cheese.

From David RK
One of my top 5 favorite breakfasts of all time. Interesting how you used sliced ham. I'll have to try that next time.