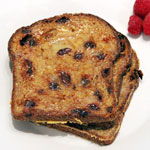 (4 servings)    Printable Version
If you like a hint of citrus in your French toast, you'll probably like this. It's a very basic recipe. If you replaced the orange juice with more milk, you'd wind up with a traditional French toast recipe. To amp up the orange flavor, I'd consider adding a teaspoon or two of orange zest to the batter if I make this again. Like any French toast, success depends so much on the bread you use. I opted for a cinnamon raisin bread. I actually think it would have been better with a rustic white bread so the orange and vanilla didn't have to compete with other flavors. But all in all, I enjoyed this recipe. I'd give it a B or a B+. (This recipe was submitted in 2004. It was tested and photographed in October 2015.) 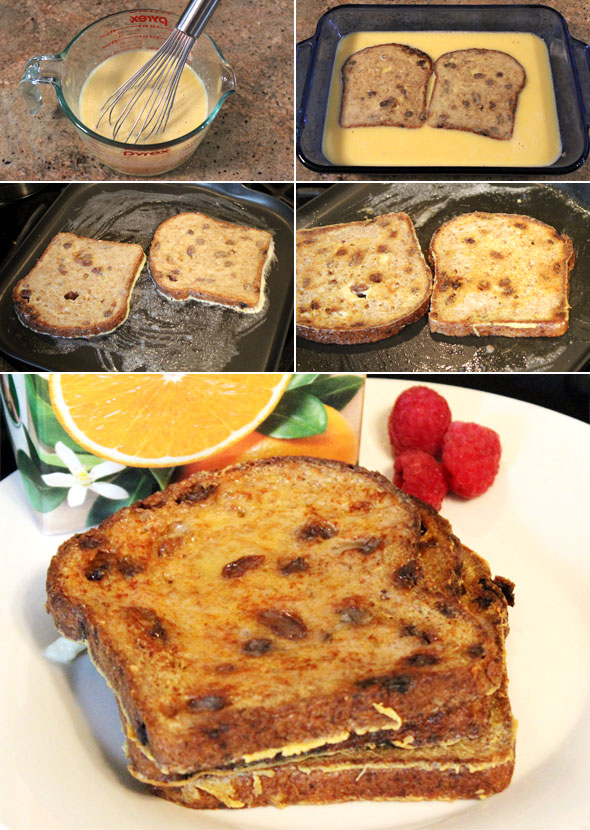 Brown both sides on hot, pre-heated griddle that has been buttered or sprayed with non-stick cooking spray.

Repeat with remaining slices of bread.

Lightly dust each serving with confectioner's sugar (if desired) and serve with softened butter and syrup.

This French toast has subtle orange flavor from orange juice that goes really well with a touch of vanilla in the recipe.

Mr Breakfast would like to thank kpossible for this recipe.


Comments About This Recipe
What do you think of Orange Vanilla French Toast?
Overall Average Rating = 5 (out of 5)
Based on 2 votes.

From autumn moon (Team Breakfast Member)
This was great because it was quick to make with very few ingredients. I added orange zest to bring out the orange flavor and it tasted wonderful. Vanilla/orange flavor with a bit of sweetness. Yum.

From Spencermerk
I'm a wrestler so I can't eat but I love food and love to cook and we had a snow day and I made this for my brother and his friend and I put whipped cream on top with orange slices around the edge so it looks like a sun! and it not only looked amazing it tasted awesome! - Spencer Merk