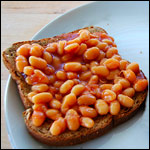 (6 servings)    Printable Version
Heat the beans in a sauce pan. Meanwhile, melt the butter in a frying pan over a medium heat. Fry the sage in butter for 1 minute. Add to the beans, mix well and serve on hot, buttered toast.

This is huge in England. Baked beans are part of a traditional breakfast.


Comments About This Recipe
What do you think of Baked Beans On Toast?
Overall Average Rating = 4 (out of 5)
Based on 17 votes.

View all 31 comments for this recipe.

Also, I typically use vegetarian beans (Bush or Heinz or any other brand available, including the fancier Grillin' Beans from Bush, four of those varieties are vegetarian) here in the US. But if those are too sweet for you - try any canned chili beans.

I usually toast the bread a bit in a toaster oven and then add the beans with butter or other fat (coconut oil is very nice) and heat that up in the toaster oven. If bored with wheat toast - try on buttered rice or mashed potatoes or on corn tortillas or in corn taco shells (messy but good) or mixed with any kind of pasta. Also onions are nice to add sometimes.

From woodland chef (Team Breakfast Member)
This is certainly one of anytime food. I am from Maine and French also so I was brought up with Boston Baked Beans and never had them on bread but my husband always asked for me to put his beans on buttered bread and I always frowned at it. I got a little brave after 35 years of making it for him now I crave it. It's one of the best ways. I love beans now. I'm going to add sage to it and see how I like it.

From Sammy J UK
Try frying the beans until the juice has gone thick and clumpy - OMG stunning.

From Amellia
Well I'm English and never have done butter and fry it! Just Heinz beans with sausage and put onto toast with normal butter on the toast all ready! Soooo nice!

From David
Classic. Serve with a fried over-easy egg on top. We love it and it's extraordinarily easy.

From Raheema
No, I think the best thing to do is warm the baked beans in the microwave. Whilst doing that, spread butter over the bread and after the beans are heated, spread them over the bread and top with grated cheese. Place in the grill until it starts to go golden and there is your Pizza Breakfast!!

This is a good recipe but it leaves out the most important thing: the baked beans used here refer to a variety not sold in the U.S. The Heinz vegetarian baked beans are probably the most similar but they not really that close.

From twiznits
I've had this for lunch, but never for breakfast. My family chops up hot dogs and cooks them with the beans. Great over toast.

I understand that the Heinz vegetarian baked beans are similar to the UK beans. I would eat this with either a poached or fried egg on top or on the side. Very good comfort food at any time of day. Try and use whole grain/granary bread. The beans are also good with French's type (mild American) mustard.

It makes you "smarter"... that breakfast there.

I learned to eat beans on toast by watching British comedies - thanks for the recipe - they're great!

From APS102
THANK YOU SOOOOO MUCH! we are having a multiculteral luncheon at school tommorrow and this is perfect. awesome

I know they aren't the same as US type baked beans. How close to our pork and beans?

From punkin
Wonderful! I love this recipe!

I was ever so bored with baked beans this way that I jazz them up with mustard, sambal olec, vegemite, mixed dried herbs or fresh basil and a touch of tomato sauce for colour. Just the thing to wake up the tongue as a counter point to most eggs scrambled, fried or poached. Vary the amounts to your suit you own taste use one or all. An infinite variety really.

I didn't know they did this in England. In a few southern U.S. states black-eyed peas are eaten over toast for good luck on New Year's Day. That's yummy.

View all 31 comments for this recipe.