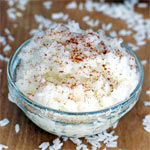 (4 servings)    Printable Version
This hot cereal was tasty and very comforting. It reminded me of being a kid, even though I have no concrete memories of eating rice for breakfast in my youth. Preparation is incredibly simple if you have leftover rice. If desired, a spoonful of raisins in each serving is a nice addition. The recipe as submitted didn't specify exact ingredient amounts. Following the recipe, I'll list the amounts that I used. In the end, this is basically a fun and different way to enjoy rice. I recommend it. (This recipe was submitted in 2004. It was tested and photographed in August 2014.) 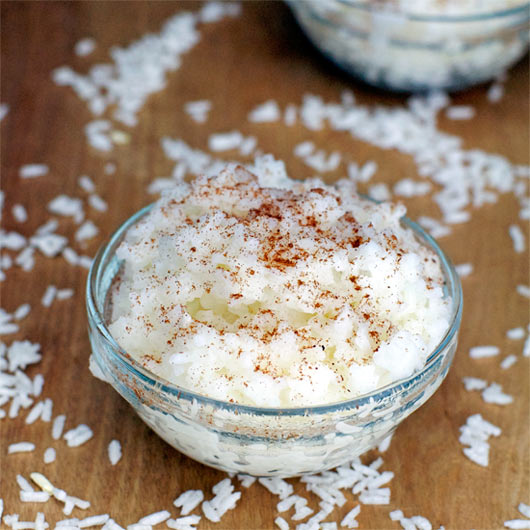 I add the cinnamon last and and stir to make a swirl pattern so it looks nice.

For the 4 cups of of rice, I used 3 Tablespoons milk, 1 Tablespoon sugar and 1 Tablespoon butter. I topped each serving with a sprinkle of a 50/50 cinnamon and sugar mix. When it comes to sugar, a little goes a long way. It only takes bit to sweeten it, so I suggest starting with about 1 teaspoon per serving and increasing from there as you see fit.


Comments About This Recipe
What do you think of Breakfast Rice (Hot Cereal)?
Overall Average Rating = 4 (out of 5)
Based on 12 votes.

Stole my dads recipe he made when he was a kid with his father. Lol.

From Casper
It was a lot better after I added some cardamom to it.

From MrsDonaldson
My mom used to make this for us in a rush before school in the mornings! Going to make it now!

From Soy Boy
This isn't a healthy breakfast. This is dessert.

From LDE
Breakfast rice was always a staple growing up in rural Indiana, and was always served with Cinnamon toast.

From Switz
Just like I used to have when I was a kid. Love it.

Making this for breakfast tomorrow. Will add some homemade applesauce (no sugar) and mix in some vanilla yogurt.

From missebbie
I guess it is where I grew up. We called this rice milk and I for one LOVED it. Every time we would have rice for dinner, rice milk for b-fast was assured.

Gosh, am I glad that I found this website! I was craving breakfast rice this morning (like mom used to make), but is there a way that I can save time and make it in my rice cooker - all in one step?

Seriously, I'm a novice. Not a cook at all, but I'm reallyy curious, and very serious. Is it possible?

From YumYumYumYum!!!
Love it! I had it ever since I was a kid and still love it now.

From Elevensees (Team Breakfast Member)
Kick up the flavor even more by using Carnation Evaporated Milk - my mother used it - it's excellent. Don't want the fat? Use the low fat version. You'll love it.

From mologna
This was what my mom fed me whenever I was sick as a little kid. Now it just makes me feel better whenever I eat it.

From woodsprite63
Even cold, this Rice is great. Like thin rice pudding. Talk about a comfort food! Yum!!!

From Yummy
Top it with some shredded coconut and crushed pineapple. Yummy!