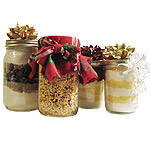 (20 servings)    Printable Version
In a medium bowl, sift all ingredients together until well mixed. Seal in a one-quart jar.

That's all there is to it.

To Prepare:
(Attach these instructions to your gift of breakfast.)

To make 8 pancakes:
In medium bowl, beat the egg with the milk and oil.

Stir in the pancake mix. Batter should be a little bit lumpy.

Dollop about a 1/4 cup batter per pancake onto a lightly greased griddle or skillet set at medium-high heat. Cook both sides until golden brown.

A great homespun gift for your favorite breakfast lover! Print out the recipe and attach it to the jar like a gift card.

Mr Breakfast would like to thank pancakegirl for this recipe.


Comments About This Recipe
What do you think of Cinnamon Pancake Mix?
Overall Average Rating = 5 (out of 5)
Based on 10 votes.

From cbibbs (Team Breakfast Member)
Increased the cinnamon, but not the sugar. Taste was excellent. Batter was too thick to make normal 1/4 cup cakes. Had to make silver dollar sized mini-cakes instead.

From Advizor
Took advice of "Bramble" and increased sugar by 1 and 1/2 tablespoons and cinnamon by nearly a teaspoon. The pancakes are delicious.

This whole think is awesome. Haven't tried the pancakes yet, but the gift card thing is really cool.

From Bramble
Hello All, I'm making these this morning. The only little tweek I could see, just by tasting the batter as is. Is, in my opinion, a bit more cinnamon and sugar. Other than that these look fabulous

From Nikki
Very good, tastey! The only thing batter was very thick.

From Robin
That was so delicious!

From Hunter258
This is an awesome recipe. Love it. I loved the idea of the left over mix. My sister loved it. Best recipe for pancakes.

From casSIUs250
Nice easy recipe that takes no time at all to prepare! Cakes fluff up nicely and taste superb!

From Colleen
Great recipe, I love the idea that you have left over mix for another time. They were very fluffy and light! Best recipe i've found yet for pancakes!