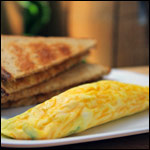 Omelettes In A Bag

(1 serving)    Printable Version
Crack eggs right into the small Ziploc bag. Add the cheese and any optional ingredients you like. Seal the bag, squish the ingredients to mix. "Burp" the air out.

Bring a medium-sized pan of water to a heavy boil.

Carefully, remove baggie from the water. Open the bag and roll the omelette onto a plate. YUM!

This was used to feed a group of twenty-five. Everyone had a hot breakfast!

WARNING From Mr Breakfast:
As of August 2010, the Ziploc company does NOT recommend using their bags to boil food. Ziploc brand bags are made from polyethylene plastic with a softening point of approximately 195 degrees Fahrenheit. When exposed to boiling water, the plastic could begin to melt.

NOTES From Mr Breakfast:
In my personal experience with this recipe, I found it best to boil the omelet for 6 minutes, reduce the heat to a simmer, flip the baggie in the water and simmer an additional 4 minutes. After 5 minutes, I found the inside of the omelet to be runny. I used a quality Ziploc freezer bag and had no problem with melting. 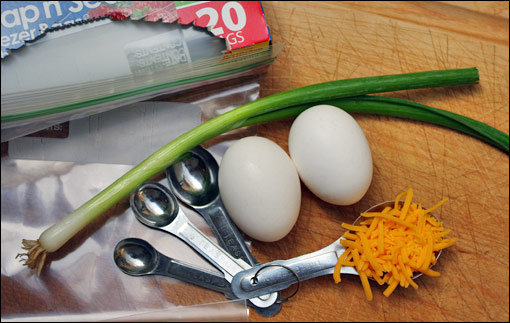 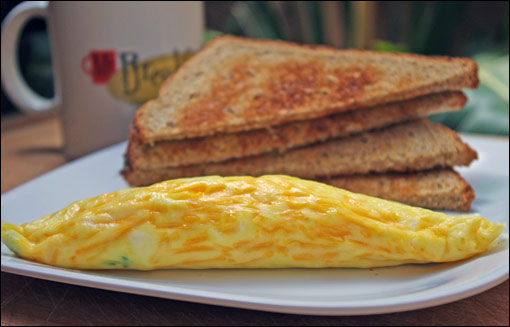 This recipe was submitted by and tested in the kitchen of Charlie and Betsy McHugh. When the omelet is done, it slides right out of the bag. No fuss. No muss. Please read warning before considering this recipe.

Mr Breakfast would like to thank McHugh for this recipe.


Comments About This Recipe
What do you think of Omelettes In A Bag?
Overall Average Rating = 5 (out of 5)
Based on 95 votes.

View all 149 comments for this recipe.

From Ya-Man
I LOVE IT! Great Omelette!

From Chef959
There are special plastic bags designed for high temperatures, as well... oven bags!

From Damara
Just tried it. It's great!

From R. Doogie
I used a Zip Lock freezer bag and made a 3 egg omelet with ham, green onion and a shredded 4-cheese blend. Took about 10 minutes of boiling. This is great. Thanks!

Relax folks. It's not hot enough to release chemicals you Panicky Petes!

Don't boil the plastic bags people! It is not safe! Look it up!

From Heather Muise (Team Breakfast Member)
Just finished trying this. I used peppers, onions, cheese, steamed some frozen broccoli and chopped it up. Also added some left over chicken roasted in oven. Delicious. Remember... make sure there is no excess water from the steamed veggies.

From invelvetshoes (Team Breakfast Member)
Just as good as an omelet in the pan. Probably took longer than a regular omelet - what with waiting for the water to heat up, but it was fun to try once.

The military has been using this method of cooking eggs for quite some time with dehydrated eggs. Add water, seal and boil.

From Kahn2
Made one with Cheddar cheese and pre-cooked bacon from the store. Just like a real omelet, but looked more space-age.

From Andersonz
Fun! We did it with the kids and used special plastic bags so there wasn't any concerns. They turned out very cool looking (a lot like your picture) and delicious!

From amesstoday
I have read this technique in the past. Tonight, I am going to try it. It is not the lazy way; it is the smarter way. Heck, I even use a washing machine instead of pounding my clothes on rocks. Heck, what is wrong with some of you people.

From Ms A Oakley
I like this. It's not about making less clean up. It was great for a family reunion where you didn't have to wait behind 6 people to get you breakfast. And probably if you made it every day it wouldn't be so good. But for a once in a while occasion where you have to feed a lot of people it's great. The taste is the same as cooking in a skillet. And yes, wait until you put it on your plate to add the cheese as it does stick.

From Styx
Fun! It works so well. They should sell special bags specifically for this. If more people knew about this, more people would do it. Love it!

From HubertSprinkler (Team Breakfast Member)
I just used this recipe to feed 12 members of the Alter Guild at church. No two were the same, every one was served at once, and I dirtied a minimum amount of pots and pans. Wonderful Brownie points were accumulated. - Ray

From Paula
Lylla B - I hope you don't use teflon pans as they have been linked to Alzheimer's, and don't use the cups made in China as they are lead base. Oh! What about metal spatulas they can rust and cause lock jaw, and so on. Thanks to the McHugh's for sharing the recipe.

It is shocking that in this day and age people still don't know that plastic bags leak chemicals into the food specially when heated! I am appalled this was even published. It is like giving a recipe that uses cigarettes.

View all 149 comments for this recipe.